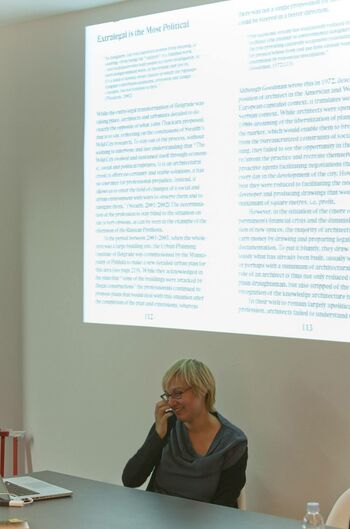 Dubravka Sekulić (1980, Niš) is an architect who researches the transformation of the built environment at the nexus between politics, law, and economy. She is Senior Tutor at the School of Architecture at the Royal College of Art, London.

Dubravka Sekulić studied at the Faculty of Architecture at the University of Belgrade and at the Design Department of Jan van Eyck Academie, Maastricht. Later she worked as a research fellow at the gta Institute for History and Theory of Architecture, ETH Zürich (2013-2016), and Assistant Professor at the IZK Institute for Contemporary Art, TU Graz in Graz (2016-2020). She received her PhD from gta Institute at ETH Zürich in 2020 with the dissertation Constructing Non-alignment: The Construction Enterprise Energoprojekt 1961-1989.

From 2003 she worked as a teaching assistant with Ivan Kucina on various programs, most of them cooperations with different schools of architecture from around the world (KTH-The Royal Institute of Technology, Sweden; Parsons-The New School for Design, New York; The University of Technology, Vienna). From 2004-2005 she was part of a group that was running alternative cultural spaces in the former printing factory BIGZ, in Belgrade. In 2007 she collaborated with Platforma 9.81, a collective for architecture and media based in Zagreb, on the project "New spatial strategy for the city of Zagreb", a consultancy study commissioned by the city of Zagreb. She was part of the "Stadium Culture" project that Srdjan Jovanovic Weiss and the NAO developed for the New Media Center_kuda.org.

The research exhibition Three points of Support: Zoran Bojović, the architect that she curated at the Museum of Contemporary Art in Belgrade in 2012, followed by a book in 2013, formed the basis for her PhD project. In 2012 Jan van Eyck Academie (Maastricht) published her book ‘'Glotzt Nicht so Romantisch! On Extra-legal Space in Belgrade as well as the book Surfing the Black Yugoslav black cinema and its transgression that she co-edited. Together with Branko Belaćević, Marko Miletić, Srdjan Prodanović and Jelena Stefanović she made a research exhibition Peti Park - A Struggle for Everyday, which was followed by a publication (2009). She was a co-curator of the conference Life of Crops: Towards an Investigative Memorialization, held in Graz in 2019. She collaborated with artist and filmmaker Ana Hušman on Don't Trace, Draw! (2020), a film that explored spatial legacy of the Yugoslav pedagogical reform.

She was associated with the Post-Master Research Lab “In Search for Common Ground” at the Royal Institute of Art, Stockholm; Jan van Eyck Academy, Maastricht; and Akademie Schloss Solitude, Stuttgart (2008). She sits at the advisory board of BLOK, Zagreb and is a founding member of Parity Group at ETH Zürich. She often exhibits and lectures on her researches throughout Europe.