Difference between revisions of "Gábor Bódy" 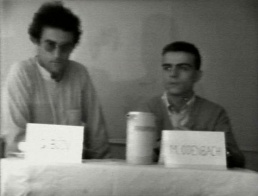 Born 1946 in Budapest. Hungarian film director, screenwriter, theoretic, and occasional actor. A pioneer of experimental filmmaking and film language, Bódy is one of the most important figures of Hungarian cinema.

Bódy was born in an urban middle-class family. He studied history and philosophy at Loránd Eötvös University and later filmmaking at the Academy for Theater and Film Arts. During his university days he became an influential member of the Béla Balázs Stúdió (BBS). He made his first film A Harmadik (The Third) (a documentary about students preparing an adaptation of Faust on stage) in 1971. He established various experimental and avantgarde projects at BBS including the Film Language Series in 1973 and the K/3 experimental film group in 1976, reshaping the postwar Hungarian avantgarde film's path.

In 1975 he completed his debut feature at BBS, which was also his graduation thesis film at the university. Amerikai Anzix [American Torso] won the Grand Prize for best new filmmaker at "International Filmfestival Mannheim-Heidelberg" and the Hungarian Film Critics prize for best first film. The film which decipts the lives of Hungarian 1848 Revolution veterans in the American Civil War features Bódy's experimentalism at the fullest. The whole film was re-edited using his own method called "light editing" in order to make it resemble a wracked silent film from the late 1800s.

His next feature Narcisz és Psyché [Narcissus and Psyche] was the largest-scale Hungarian production of its era. This epic production based on Sándor Weöres's poetic work Psyché starred Patricia Adriani, Udo Kier and György Cserhalmi and exists in three versions: an original 210-minute two part version, a 136-minute version for foreign distribution and a 270-minute three part television version.

In 1980 Bódy began to work on the first international video magazine INFERMENTAL and managed to publish the first of 10 issues (plus one special issue) while on a residency at DAAD Berliner Küunstlerprogram in 1982. The series published featured a range of guest editors and in total included work from over 1500 artists from 36 countries and was published up to 1991.

After many frustrated projects Bódy managed to complete what was to become his final feature film Kutya éji dala [Dog's Night Song]. Bódy cast himself as the lead in this ambitious and influential feature which incorporated Super8 and video footage as well as a range of Hungarian underground punk bands of the time in order to a film "deeply rooted in the fundamentals of today's reality."

In 1985 Bódy died under sketchy circumstances. A later published information (2001) hints his earlier collaboration (1973-1983) with the Hungarian Secret Police, the III/III. Authorities of the time (Hungary was then considered a 'satellite' country of the Soviet Union) stated that he had killed himself. His widow instead preferred a charge of murder against certain unidentified parties. No official investigation followed and Bódy's fate remains a mystery to this day. 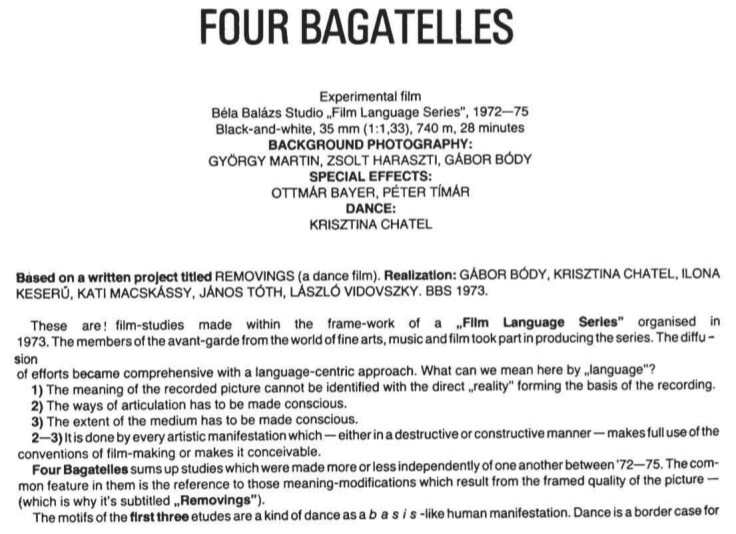 The confrontation with philosophical and mythical themes—see the formal and experimental, film narration Narcissus und Psyche—was among the central motives in the work by Gabór Bódy. In De occulta philosophia (Philo-Clip), visualizing a secret knowledge concerning the nature of man with direct references to the Renaissance and Leonardo da Vinci, precisely the treatise of Agrippa von Nettesheim of the same name, is reworked to a disassociating geometry. The use of laser beams structures the duration of the tape, which evolved from a collaboration with Llurex (Egon Bunne) at the dffb in Berlin, and was also published in the context of the video magazine Infermental, of which Bódy was one of the founders.[1]

Dancing eurynome (Mytho-Clip) is dedicated to the Greek Goddess Eurynome, the child of Oceanus and Tethys. She was the mother of the Graces and of the river-god Aesopus. Eurynome dances on water - and to the music of der Plan. Astrological symbols (an egg, a bird and the suchlike) are added to the image of her mythical dance. In Mytho-Clip (as in Philo-Clip and Lyric-Clip), Bódy exploits video's considerable potential to transform the image.[2]

There is also dancing in this tape but this time it's about the lyric dance of youth and is depicted by Bódy in an unconventional way. Walzer is a poem written by Novalis, the German romantic poet (1772-1801) to mark the premature death of his fiancée Sophie von Kühn. The text of Walzer is recited and appears in a spiral - the spiral of life? Lyric-Clip reflects the transience of youth as borne out by the macabre, dancing skeleton that appears on screen.[3]

Miklós Peternák: Gábor Bódy. The Artist and the Computer 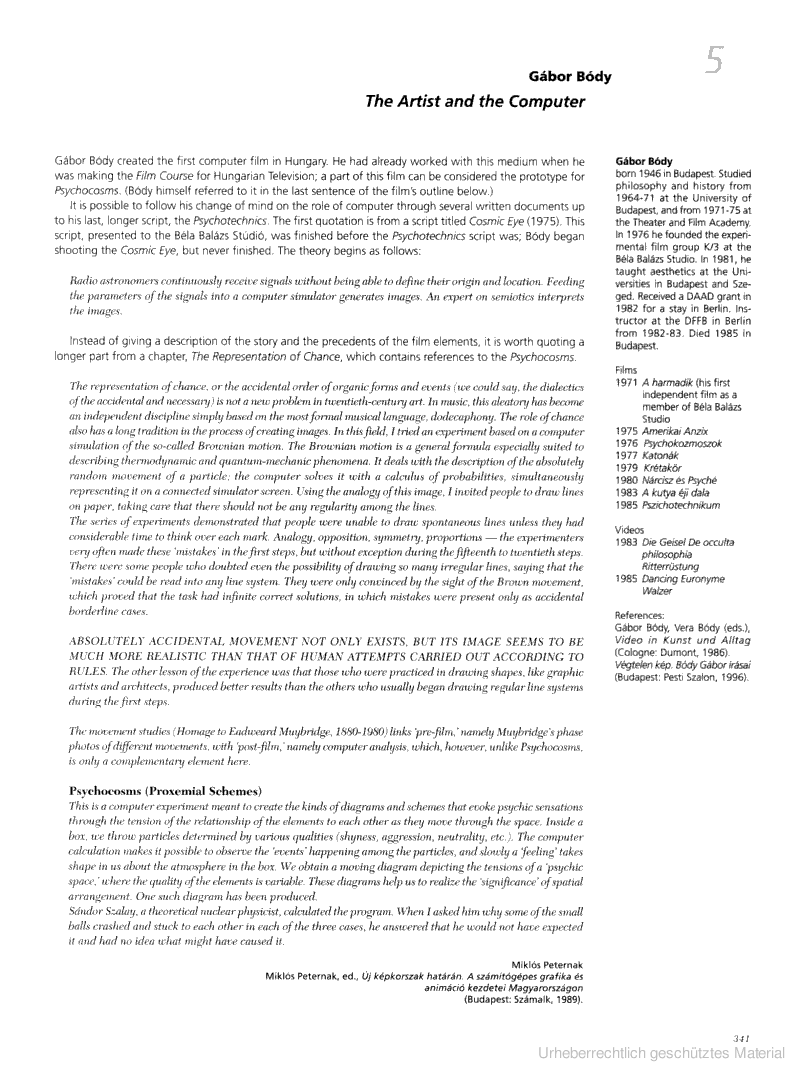 source: Miklós Peternák, "Gábor Bódy. The Artist and the Computer", in Beyond Art. A Third Culture, edited by Peter Weibel, 2005. 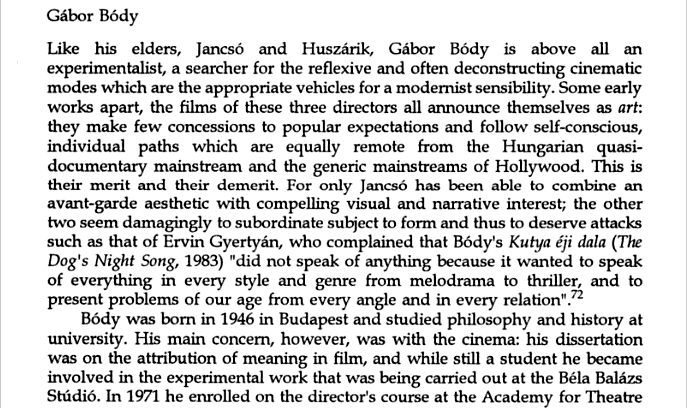 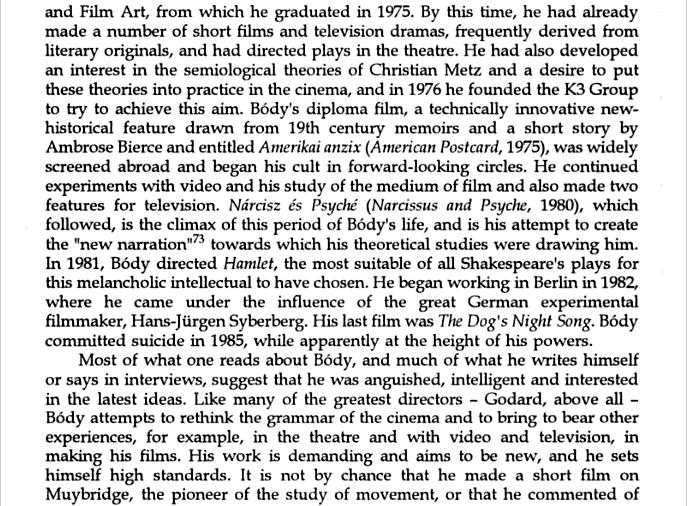 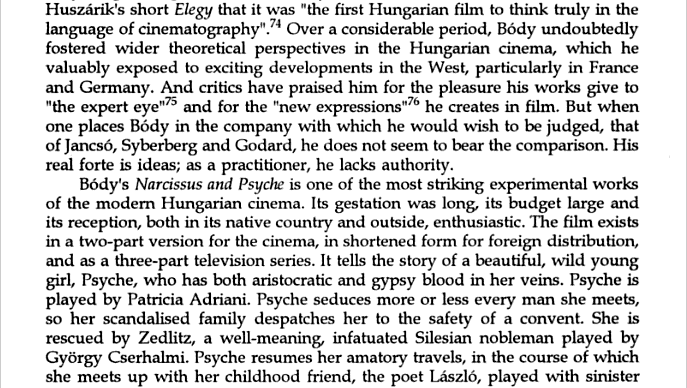 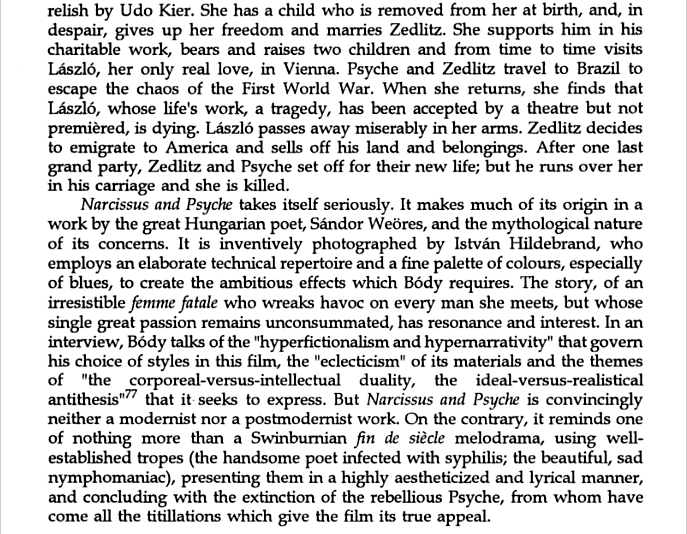 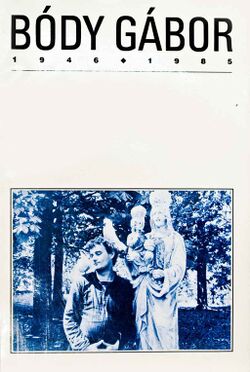