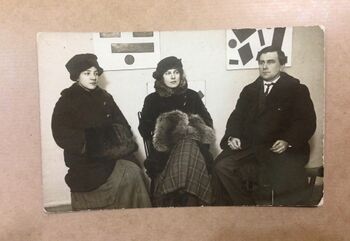 Born Olga Vladimirovna Rozanova in 1886 in Melenki, Vladimir Province, Russia. 1896-1904 attends school in Vladimir-on-Kliazma. 1904-10 studies at the art school of Konstantin Yuon and Ivan Dudin. 1907 audits classes at the Bolshakov Painting and Sculpture Institute and at the Central Stroganov Industrial Art Institute, both in Moscow. 1911-13 moves to St. Petersburg in 1911; attends the Zvantseva Art School; in 1912 makes the acquaintance of Russian Futurist poet Alexei Kruchenykh, inventor and theoretician of zaum ('transrational', or nonsense realism); maintains close association with the Union of Youth, contributing to first Union of Youth exhibition in St. Petersburg (1912-13) and its journal in 1913. 1913-15 begins to illustrate a series of Cubo-Futurist books, including Te li le (1914) and Zaumnaia gniga [Transrational Gook] (1915); in 1914 meets Marinetti in St. Petersburg, and contributes to the Prima Esposizione Libera Futurista Internationale in Rome. 1915 creates fashion and textile designs, some of which she contributes to Women Artists for the Victims of War in Moscow; contributes to Tramway V exhibition in March, to Exhibition of Painting of Leftist Trends in April, and to 0.10 in December, all Petrograd; works with Kruchenykh on the album Voina [War] (1916); moves to Moscow. 1916-17 with Kazimir Malevich, Mikhail Matyushin, Lyubov Popova, Nikolai Roslavets, and others, becomes a member of the Supremus group and secretary of its journal (which was not published); contributes to the last Jack of Diamonds exhibition (the fifth), which opens in Moscow in November 1916; contributes poems to Kruchenykh's Balos (1917). 1918 helps decorate the Moscow streets and squares for May Day; becomes a member of IZO Narkompros, with Alexander Rodchenko in charge of the Art-Industry Sub-Section of IZO; helps organize Svomas in several provincial towns; publishes in the newspaper Anarkhiia [Anarchy]. Acts as a secretary of the Leftist Federation of the Professional Union of Artists and Painters and contributes to its first exhibition; contributes to Kruchenykh's Exhibition of Moscow Futurists in Tiflis. 1918 dies of diphtheria in Moscow. 1918 posthumous exhibition opens as the First State Exhibition in Moscow, with more than 250 pieces. 1919 represented at the Tenth State Exhibition: Non-Objective Creativity and Suprematism. 1922 represented at the First Russian Art Exhibition in Berlin.