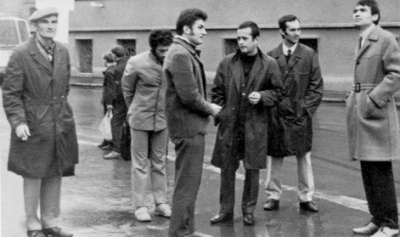 The Sigma Group was an experimental group active in Timişoara between 1969-1980 and consisting of Ştefan Bertalan, Lucian Codreanu (matematician, from 1970), Constantin Flondor, Ioan Gaita, Elisei Rusu (shortly), Doru Tulcan (1969-1978). Its programme was both artistic and pedagogic; its members were teachers at the Fine Arts Academy in Timisoara. The group put emphasis on teamwork and interdisciplinarity (integrate mathematics, cybernetics, bionics, psychology, and architecture in the arts), used variety of media (paper, cardboard, wood, aluminum, glass, stiplex, synthetic materials, photography, film), and was influenced by Bauhaus, constructivism and new trends in art and architecture.

The name 'Sigma' appeared only after Codreanu's accession in 1970, but the group had formed already in 1969.

Dismantling of the group took place slowly, over several years and has never been declared formally. The last event all members took part was in 1976 on the banks of the Timis River. Multivision of Flondor and Tulcan in 1978 in the gym of School of Fine Arts Timişoara was the last public demonstration of Sigma; all group members attended. In 1978 the group entered a period of crisis after Bertalan was moved to the Institute of Architecture. Afterwards, the group splits.

Accounts of the history of the group[edit]

The Other Transatlantic exhibition, 2017

On the 20th of July 1969, Romanians, like their fellow humans in other nations across the world, were intently following the broadcast of the moon landing. For this nation in particular, it was not only a symbol of the triumph of science and technology, but proof that a country that had been floundering under the rule of Nicolae Ceauşescu was finally opening itself up to the world. It was only a year before that its leader had refused to take part in the invasion of Czechoslovakia, in outright defiance of the instructions coming from Moscow. While a certain thaw with regard to political terror lasted only a few years, it opened up a space of freedom, in which brilliant new movements could be born, including SIGMA (1969-1981), one of the most interesting Romanian neo-avant-garde groups to mesh art with science and technology. Its founders Ştefan Bertalan and Constantin Flondor met towards the beginning of the 1960s as lecturers at the Art Lycée in Timișoara. They shared similar ideas regarding the role of art in modern socialist societies. The process of modernizing the country wasn’t only intended to improve the quality of life for individuals, but it also affected the way they interpreted reality. According to Bertalan and Flondor, artists who follow the modernist spirit should treat art not just as a medium for subjective expression, but also as a tool for the visual analysis of new forms of experiencing the world. They first set up the 1+1+1 Group with Roman Cotoşman. It was dedicated to the concept of Cybernetic Art and Op Art, inspired by theories of information, mathematics and bionics – an interdisciplinary study of creating machines that make use of the form and mechanics of living organisms. The group’s principles of honoring individuality shed light on the meaning behind the group’s name. This, however, changed as the group evolved into SIGMA, which functioned as a collective in the traditional sense. The group was established in 1969, following 1+1+1’s representing Romania duing the Constructivist Biennial in Nuremberg. There, Bertalan, Flondor and Cotoşman became acquainted with the International milieu of artists working at the intersection of art, science and technology, such as Nicolas Schöffer or Julio Le Parc. They returned to Romania without Cotoşman, who’d decided to escape to the West. They filled his spot with several artists, who also lectured at the school in Timișoara, including Ioan Gait, Elisei Rusu, Doru Tulcan, and also mathematician Luciana Codreanu.

The activities of SIGMA were based on two main pillars: creating a new art lexicon and developing a progressive form of pedagogy. For the group, geometry formed the foundation of reference, its rules re-evaluated in a shifting reality. Flondor, when asked about the inspiration he gleaned from abstract art, asserted that SIGMA’s practice had never been focused on abstraction, but on the concrete aspects of geometry, architecture and nature. This group of artists created several series of analytical drawings, architectural installations, which were subject to their environment, as well as sculptures that involved kinetic aspects, as well as experimental films dedicated to the analysis of such evanescent phenomena as the bursting of soap bubbles. One of SIGMA’s most intriguing works was the utopian project of an information tower constructed especially for the public space of Timișoara. The edifice was meant to react to changes in its immediate environment thanks to a simple computer system installed within it (similarly to the towers built by Nicolas Schöffer), while offering a stock of basic, everyday information. In SIGMA’s actions, art, in making use of the achievements of technology, brings to life new ways of experiencing the world. In parallel to their collaborative work, its members dedicated themselves to cultivating a new formula for instruction, which they introduced in the school they taught—under the direction of Flondor since 1969. Rather than promote hierarchical relationships, the school developed partner relationships and a pedagogical approach rooted in a sense of universal equality. Interdisciplinarity and the integration of theory and practice were key, based on the ideas of Bauhaus. The preferred formula for carrying out lessons were workshops held in the open air, where artists and their students produced installations that were open to the effects of the environment. The pedagogical program made up an integral part of SIGMA’s creative activities, while art became a tool for researching shifts in the way reality is perceived as a result of scientific and technological development.

A defining characteristic of the Sigma group was the declared program of work, based on the principle of team and interdisciplinary work (mathematics, cybernetics, bionics, but also plastic structures). The first creation period of Sigma group (1970-1974) is characterised by projects made in common, visible also in the system of participation in exhibitions. One example of such a project was "The Informational Tower", conceived in 1970, mixing architecture and sculpture, exhibited information within a show of light and sound. But not only the public projects, as the geometric structure realized in 1971 for the hallway of the Students' House in Timisoara or the project of fountain which brought them an U.A.P. prize, have marked the important moments of the group's development; a new vision upon their subsequent evolution was to be marked by the action and the environment called "bloating structures" and realized at the Bastion Gallery in Timisoara, for the UNESCO Plastic Arts' Week. In the Bastion Gallery the rooms have been organized with bloating structures in the form of transparent tubes, onto which, during the opening, a dia and film projection took place. Thus, the spatial environment took the form of a happening with public assistance. In the same year, Bertalan, Flondor and Tulcan were invited to participate in the exhibition "Art and Energy" in Bucharest, where they created spatial installations which were separate but at the same time within a unitary ensemble that carried the unmistakable mark of the group. The last big common action of the group before they separated was "Multi-vision" (presented at the exhibition "Study 1", Timisoara, 1978), a spatial environment formed by a tri-dimensional structure made of coloured semi-transparent nets, spatially arranged in the form of a tetrahedron, onto which there was a projection of black and white and colour film for two cameras.

By the early seventies, the most representative movements of making "art by numbers" in Romania were the "sigma" group in Timisoara and Kinema Ikon. Sigma was intimately connected to a neo-constructivist (Bauhaus-like) practice both in creation and teaching, while the second was a rather structuralist-borne implant in experimental film-making. Although "sigma" was very well-known and held in high esteem (even by the political establishment of the time), whereas Kinema Ikon was barely known at all, pursuing its research in a rather silent if not hidden manner, both groups shared, in the words of one of the "sigma" manifestoes, "the reconsideration of the environment as an object of artistic research" and they aimed, manifestly, at the development of an "intelligence able to adapt them to a future culture" inescapably marked by "the development of an algorithmic culture". Structures, frames, schemes, recurrent invariants, technical manipulation, calculation, repetition and scientific-like insight were the main marks of their aesthetic outlook. "Organizational" and meliorist, positivist and centripetal, highly "humanistic" in a contemporary sense, such artistic endeavors are nonetheless stamped by that profoundly Utopian drive of the historical avant-garde. Their unexpressed goal was to regain a certain, "alternative transcendence" for our times, one that was believed to be controllable, science-based, computational, and eventually thoroughly intelligible.