Martijn Tellinga (The Netherlands, 1974) is an artist, composer and occasional performer. His practice fuses elements of concert, installation and performance art. Drawn from a reduced formalist-seeming vocabulary, his work centres on the exploration of sound & listening to express ideas of space, place and process: their reciprocal production, contextual intertwining, and potential as a perceptual, performative and social medium. Much of his work is score-based and includes a wide variety of conceptual actions and chance operations, probing the emergent field between intended and accidental occurrences.

In recent years he has been producing performance installations explorative of extreme duration, sound installation work investigating the practice of resonance tuning, and documentary pieces utilising principles of acoustic measurement and intervention style negotiations of site. These works have increasingly aligned his output with emerging propositions for an evolved, postmedia music practice capable of addressing an expanded field of materials, concepts and symbolic relationships. His current work questions how notions of musicality and musical form can be reimagined and extended through installation work. With his research ‘Scoring Space: An Inquiry into Musically Driven Installation Practice’, he is a funded Fiosraigh PhD candidate at the Graduate School of Creative Arts and Media in Dublin, Ireland.

He received a Master’s degree in Sonology and multiple Stipendiums for Established Artists from the Mondriaan Fund. He presents worldwide, lectures and works in residence. The past 3 years, he has articulated his artistic research through the development of courses focussing on the spatial, processual and environmental modalities of sound informed practices. This led to a visiting professorship at the Central Academy of Fine Arts in Beijing and ArtEZ Academy in Arnhem, and intensive courses at the Modern Academy in Hong Kong and Museo Ex Teresa Arte Actual in Mexico City.

He is one of the curator producers of the long running series DNK-Amsterdam. He lives and works in Amsterdam, Netherlands. 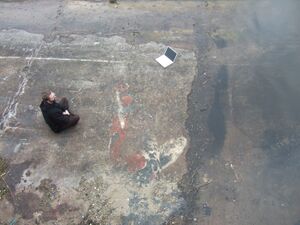