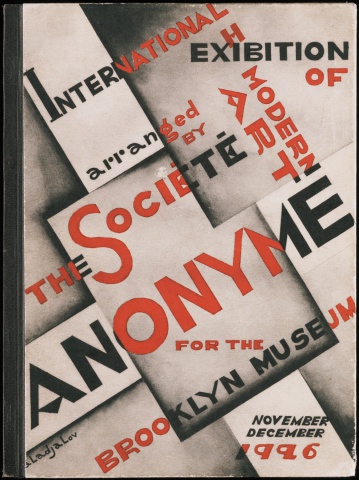 The title for this major exhibition prepared by the Société Anonyme (Katherine S. Dreier, Marcel Duchamp, Man Ray) for the Brooklyn Museum “was lifted from the 1913 Armory Show, in which Dreier was represented by two paintings, and in its scope it rivalled the 1917 Society of Independent Artists exhibition. Dreier had four galleries in the exhibition made up to resemble rooms in a house to illustrate how modern art could and should readily integrate into an everyday domestic environment, and there was also a prototype of a ‘television room’, designed in conjunction with Frederick Kiesler, which would make any house or museum a worldwide museum of art by illuminating different slides of masterpieces with the ‘turn of a knob’. Concurrent with the exhibition the Société sponsored eighteen lectures, fourteen of which were delivered by Dreier herself. Opened on 18 November, the Brooklyn exhibition featured 308 works by 106 artists from 23 countries and attracted over 52,000 visitors in seven weeks.” (from John D. Angeline, “Stuart Davis and El Lissitzky”, 1997)