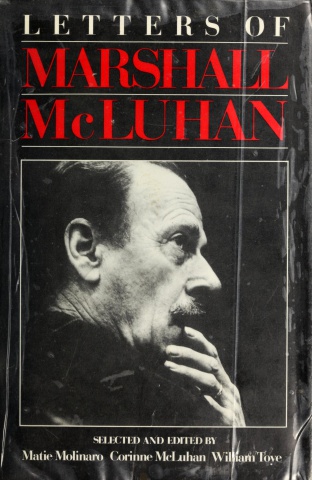 Heavily annotated, the letters are arranged in three sections, each with a period introduction: 1931-1936 takes McLuhan through the University of Manitoba and Cambridge University. 1936-1946 covers one year’s teaching at the University of Wisconsin; two years at Saint Louis University; one year, with his bride, at Cambridge for work on his Ph.D.; four more years at Saint Louis; and two years as Assumption College, Windsor, Ontario. These letters include a large correspondence with Wyndham Lewis. The last section begins in 1946, when McLuhan went to the University of Toronto. Two years later he began a long correspondence with Ezra Pound. Covering the period of McLuhan’s fame, it ends in September 1979 with a letter to Pierre Elliott Trudeau, written shortly before McLuhan had a stroke that rendered him speechless.

These letters have been selected from a large collection, now in the Public Archives of Canada, and offer a valuable commentary on McLuhan’s work and, in some instances, the most lucid and detailed explanation of his ideas available.

One Response to “Letters of Marshall McLuhan (1987)”