Fredric Jameson: The Geopolitical Aesthetic: Cinema and Space in the World System (1992) Taking contemporary films from the United States, Russia, Taiwan, France, and the Philippines, The Geopolitical Aesthetic offers a reading of some of the most interesting films of the last decade and a general account of filmic representation in the postmodern world. Fredric Jameson poses some essential questions: How does representation function in contemporary film? How does contemporary cinema represent an ever more complex and international social reality? Jameson’s sophisticated and theoretically informed readings stress the ways in which disparate films—for example, Godard’s Passion, Pakula’s All the President’s Men, Yang’s The Terrorizer, Tahimik’s The Perfumed Nightmare, Tarkovsky’s Andrei Roublev—confront similar problems of representation. The solutions vary widely but the drive remains the same—the desire to find adequate allegories for our social existence.

The Geopolitical Aesthetic, a refinement and development of the arguments put forward in Jameson’s seminal work The Political Unconscious, is crucial reading for everyone interested in both film analysis and cultural studies. Fredric Jameson, a leading voice on the subject of postmodernism, assembles his most powerful writings on the culture of late capitalism in this essential volume. Classic insights on pastiche, nostalgia, and architecture stand alongside essays on the status of history, theory, Marxism, and the subject in an age propelled by finance capital and endless spectacle. Surveying the debates that blazed up around his earlier essays, Jameson responds to critics and maps out the theoretical positions of postmodernism’s prominent friends and foes. 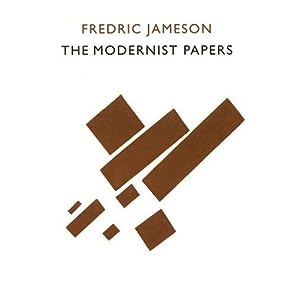 “A new perspective on Proust, Joyce, Kafka and others from master of literary theory.

Cultural critic Fredric Jameson, renowned for his incisive studies of the passage of modernism to postmodernism, for the first time since his acclaimed A Singular Modernity returns to the movement that dramatically broke with all tradition in search of progress.

The Modernist Papers is a tour de froce of anlysis and criticism, in which Jameson brings his dynamic and acute thought to bear on the modernist literature of the nineteenth and twentieth centuries. Jameson discusses modernist poetics, including intensive discussions of the work of Baudelaire, Rimbaud, Mallarmé, Wallace Stevens, Joyce, Proust, and Thomas Mann. He explores the peculiarties of the American literary field, taking in William Carlos Williams and the American epic, and examines the language theories of Gertrude Stein. Refusing to see modernism as simply a Western phenomenon he also pays close attention to its Japanese expression; while the complexities of a late modernist representation of twentieth-century politics are articulated in a concluding section on Peter Weiss’s novel The Aesthetics of Resistance.”