Postmedieval, a Journal of Medieval Cultural Studies, Vol 4, No 1: Ecomaterialism (2013) 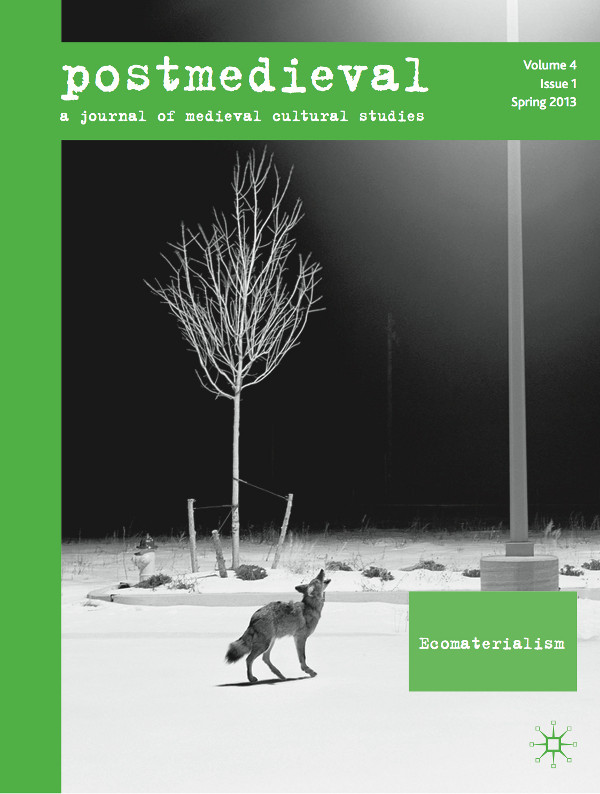 postmedieval is a cross-disciplinary, peer-reviewed journal in medieval studies that aims to bring the medieval and modern into productive critical relation.

“The latest issue of postmedieval takes up Jane Bennett’s challenge in the last chapter of her book Vibrant Matter: A Political Ecology of Things to rethink environment and landscape from an actor-network point of view. Focusing upon the meeting of ecocriticisim with other modes of theoretical and critical inquiry, ecomaterialism creates a forum where the materiality of the world obtains the complicated agency and lack of catastrophe that environmental criticism too often does not grant. We focus upon the living elements earth, air, water, fire, and their medial instantiations: cloud, road, glacier, abyss. Rather than a traditional ecocritical mode that traces the interface of human with landscape, we are interested in reconceiving ecomaterial spaces and objects as a web of co-constituitive and hybrid actants.” “The urban youth frequenting the Internet cafés of Accra, Ghana, who are decidedly not members of their country’s elite, use the Internet largely as a way to orchestrate encounters across distance and amass foreign ties–activities once limited to the wealthy, university-educated classes. The Internet, accessed on second-hand computers (castoffs from the United States and Europe), has become for these youths a means of enacting a more cosmopolitan self. In Invisible Users, Jenna Burrell offers a richly observed account of how these Internet enthusiasts have adopted, and adapted to their own priorities, a technological system that was not designed with them in mind.

Burrell describes the material space of the urban Internet café and the virtual space of push and pull between young Ghanaians and the foreigners they encounter online; the region’s famous 419 scam strategies and the rumors of “big gains” that fuel them; the influential role of churches and theories about how the supernatural operates through the network; and development rhetoric about digital technologies and the future viability of African Internet cafés in the region.

Burrell, integrating concepts from science and technology studies and African studies with empirical findings from her own field work in Ghana, captures the interpretive flexibility of technology by users in the margins but also highlights how their invisibility puts limits on their full inclusion into a global network society.” “Much of what humans know we cannot say. And much of what we do we cannot describe. For example, how do we know how to ride a bike when we can’t explain how we do it? Abilities like this were called “tacit knowledge” by physical chemist and philosopher Michael Polanyi, but here Harry Collins analyzes the term, and the behavior, in much greater detail, often departing from Polanyi’s treatment.

Tacit knowledge drives everything from language, science, education, and management to sport, bicycle riding, art, and our interaction with technology. In Collins’s able hands, it also functions at last as a framework for understanding human behavior in a range of disciplines.”