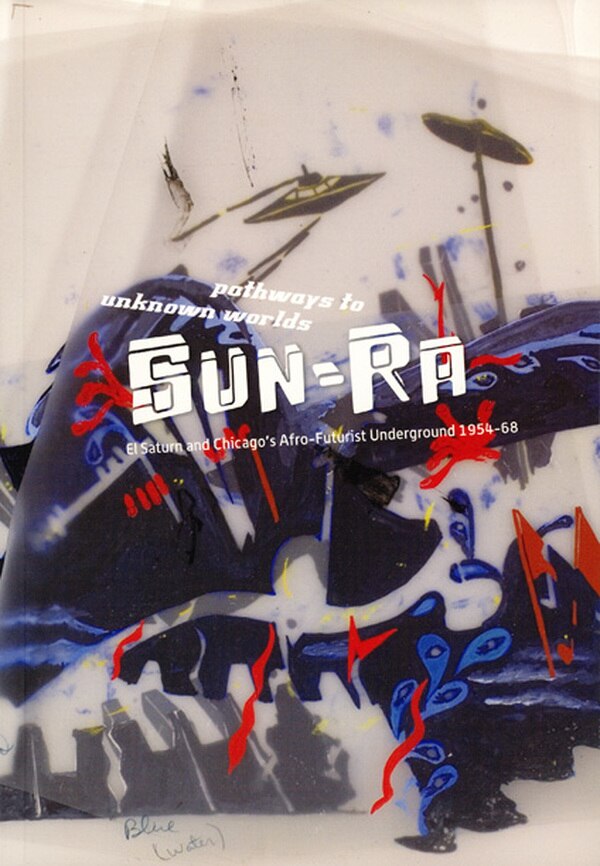 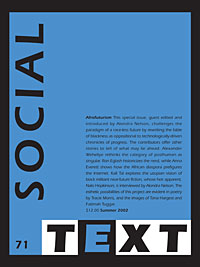 The issue guest edited and introduced by Alondra Nelson explores futurist themes, sci-fi imagery, and technological innovation in African diasporic culture. Contributors approach this under-explored theme from a variety of angles: as a novel frame of reference for visual culture; as fiction of the near-future; as poetry; as new forms of black subjectivity; as new narratives about the digital revolution; and as the imagining of future directions in African diasporic studies. Alexander G. Weheliye rethinks the category of the posthuman. Ron Eglash historicizes the nerd, while Anna Everett shows how the African diaspora prefigures the Internet. Kali Tal explores the utopian vision of black militant near-future fiction, whose heir apparent, Nalo Hopkinson, is interviewed by Alondra Nelson. The esthetic possibilities of this project are evident in poetry by Tracie Morris, and the images of Tana Hargest and Fatimah Tuggar. Sound can be deployed to produce discomfort, express a threat, or create an ambience of fear or dread—to produce a bad vibe. Sonic weapons of this sort include the “psychoacoustic correction” aimed at Panama strongman Manuel Noriega by the U.S. Army and at the Branch Davidians in Waco by the FBI, sonic booms (or “sound bombs”) over the Gaza strip, and high frequency rat repellants used against teenagers in malls. At the same time, artists and musicians generate intense frequencies in the search for new aesthetic experiences and new ways of mobilizing bodies in rhythm. In Sonic Warfare, Steve Goodman explores these uses of acoustic force and how they affect populations.

Most theoretical discussions of sound and music cultures in relationship to power, Goodman argues, have a missing dimension: the politics of frequency. Goodman supplies this by drawing a speculative diagram of sonic forces, investigating the deployment of sound systems in the modulation of affect. Traversing philosophy, science, fiction, aesthetics, and popular culture, he maps a (dis)continuum of vibrational force, encompassing police and military research into acoustic means of crowd control, the corporate deployment of sonic branding, and the intense sonic encounters of sound art and music culture.

Goodman concludes with speculations on the not yet heard—the concept of unsound, which relates to both the peripheries of auditory perception and the unactualized nexus of rhythms and frequencies within audible bandwidths.