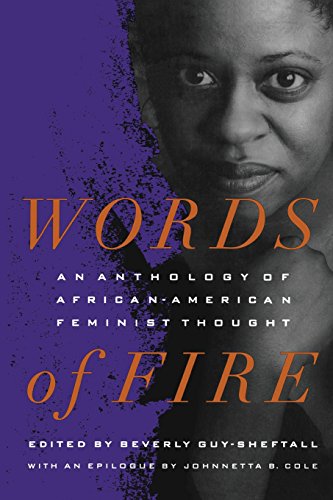 “This anthology traces the development, from the early 1800s to the present, of black feminist thought in the United States, Words of Fire is Beverly Guy-Sheftall’s comprehensive collection of writings, in the feminist tradition, of more than sixty African American women. From the pioneering work of abolitionist Maria Miller Stewart and anti-lynching crusader Ida Wells-Barnett to the writings of contemporary feminist critics Michele Wallace and bell hooks, black women have been writing about the multiple jeopardies—racism, sexism, and classism—that have made it imperative for them to forge a brand of feminism uniquely their own.”

See also This Bridge Called My Back: Writings by Radical Women of Color (1981) and Home Girls: A Black Feminist Anthology (1983). “This book is a testimony to women of color feminism as it emerged in the last quarter of the twentieth century. Through personal essays, criticism, interviews, testimonials, poetry, and visual art, the collection explores, as co-editor Cherríe Moraga writes, “the complex confluence of identities—race, class, gender, and sexuality—systemic to women of color oppression and liberation.””