From Monoskop
(Redirected from Iiasanet)
Jump to navigation Jump to search

Discussions about the shared scientific research between the United States and the Soviet Union were held at least from 1966 and dealt with so called 'neutral' topics, such as climate change, management of oceans, but also cybernetics.

Years of discussions, later expanded into multilateral negotiations, eventually gave way to a new type of institution. It was to accommodate the scientific East-West ("non-governmental") collaboration. Its members were not nations, but scientific institutions from each participating nation, although they were funded by the respective governments.

Title of the institution was proposed as the "International Center for the Study of Problems Common to Advanced Industrialized Societies" but that was controversial since the terms "centre/center", "advanced societies", "industrialized societies", and "common problems" could not be agreed upon, so the parties finally settled with a rather depleted "International Institute for Applied Systems Analysis" (IIASA).[1]

Foundation of the institute was embedded in systems thinking (Parsons, Bertalanffy, Luhmann) and from across the Atlantic also in so-called future research and McLuhanist media boom.

A short but entertaining account of the foundation of IIASA is given by its first director, Howard Raiffa, in the 1993 anniversary issue of the Institute's journal.[2] A much detailed and rigorous account of political negotiations against the wider background of the 1960s and 70s leading to the establishment of the IIASA is given from the point of the US "bridge building" by Leena Campbell-Riska in her recent book counting six hundred pages.[3] In addition, the institute has a rich collection of its proceedings and reports on its website. 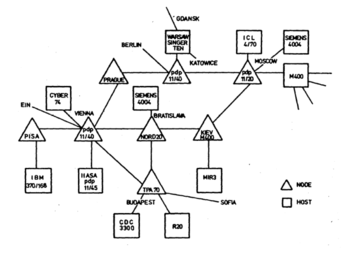 Soon after its establishment, IIASA began conducting steps in computer networking. In September 1973 and October 1974, the Institute organised conferences with the internet pioneers such as Louis Pouzin (director of the French network CYCLADES), Victor Glushkov, Vint Cerf (part of Arpanet), P.T. Kirstein (British, crucial in early ARPANET), Donald Davies (British scientist who theoretised packet switching, independently from Baran), and his colleague DLA Barber.[6] The Institute saw itself in the ideal position to coordinate the discussions about two main issues of computer networking: interconnectedness and standards, however was discouraged by pretty much all participants and adviced to connect to the already existing networks instead.[7]

A workshop followed in September 1975 which led to the establishment of data connections, via a PDP 11/40 computer in Vienna, to computer centres in Bratislava (NORD 20 minicomputer, there connected to a local general-purpose computer Siemens 4004 as host), Prague, Budapest (TPA-70, via packet switching, there connected to CDC-3000 and R20), Pisa (to IBM 370/168), and EIN network. These nodes were further connected to others (see a scheme).[9][10] EIN was expected to connect to Arpanet. In addition, possibilities to connect to Italy's RPC and France's CYCLADES were explored.

Most of the actual experimentation however was between IIASA and Moscow and IIASA and Budapest. Also, all connections were at slow speeds. If IIASA were to go to higher speed connectivity, it would have to solve the problem of the high cost of conditioned telephone lines. After the workshop and into 1976, pairwise experimentation continued but no connect- ions were yet maintained on a permanent basis. At a meeting in Budapest in April 1976, 19 national institutions were represented, 12 of which committed themselves to active participation in the IIASA Computer Network. This plan included computers at Pisa, Italy; Kiev, Ukraine; 3 centers in Poland; 2 centers in Czechoslovakia, Vienna, Austria; Berlin, GDR section; and Sofia, Bulgaria. A link to EIN was included, but the work was mainly with computer centers in Eastern Europe. There was general agreement to accept a Hungarian designed operating system NOTA for the nodes and that each center should send a researcher to Laxenburg so they could work together on the necessary protocol layers. The next step would be to construct the communications subsystem. For that, the IIASA project would need cooperation from the post, telephone and telegraph (PTT) authorities in each participating country.[11] 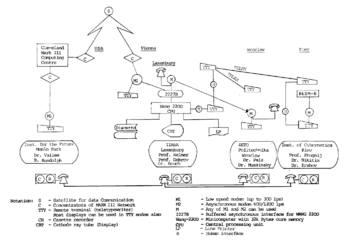 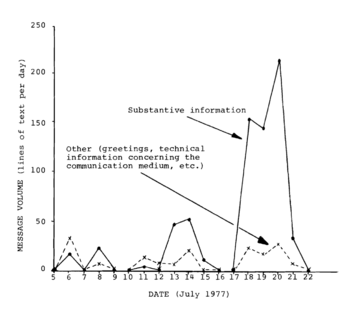 Daily volume of messages in the 1977 experiment (US-IIASA connection only; the volume on each of other two lines was estimated to be similar[13]).[14]

In July 1977, the institute conducted a four-day long teleconference out of its base near Vienna, with the remote panels in California, Poland, and Soviet Union. Originally it was envisioned as a computer-assisted panel session (what they called CAITR[15]) of the participants who would respond to an international call, but the plan was much simplified. The conference saw participants preselected via personal networks and a variety of media technologies (CAPS[16]), used only to bridge the geographical distance. Between all nodes two parallel lines existed: a text channel used during the experiment, and an analogue telephone line used mostly during the setting up of the network.[17] At IIASA headquarters, there were five panels, altogether with 30-something people, each panel equipped with a terminal with online access to the specially designed program running on IIASA's PDP-11/45 computer. Data with Kiev were exchanged through telex; Wroclaw's ZETO Computer Centre had a dial-up connection to a WANG-2200 minicomputer at IIASA; and Institute of Future in California was connected via satellite from Mark III in Cleveland, Ohio, to Vienna. 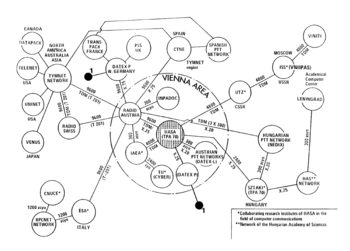 As of 1979, there were connections which already allowed IIASA scientists access to European Space Agency (ESRIN) and the International Atomic Energy Agency (IAEA) databases and via TYMNET to research centers in North America. Large computers at Pisa and Technical University (TU) in Vienna were now regularly accessed from Laxenburg. The main provision in this scheme was for connections to East European countries. In practice, however, the telephone line connections to and in Eastern Europe had inadequate switching. By one report there were only two main dialup lines from Austria to the East and they were used mainly for telephone traffic. Butrimenko was now stressing that the node in Budapest was perhaps the gateway between national centers he had hoped IIASA would be. The IIASA computer science project had solved some of the problems in at least experimental and simple ways to provide transborder data flow. But mainly IIASA facilitated an interchange of people, information and ideas.[20]

Decline of the plans to establish a permanent international computer network

By 1979, Butrimenko reported difficulty getting cooperation to solve the legal and financial problems of access to interlinked computer systems. Especially, IIASA had no resources to pay for higher quality lines and the PTTs involved were not yet interested in developing lines for data communication which might challenge the telephone system and its particular technology. Researchers developing EIN reported similar difficulty. After 1979, IIASANET and EIN as actually functioning physical networks were no longer reported on in the technical literature.[21]