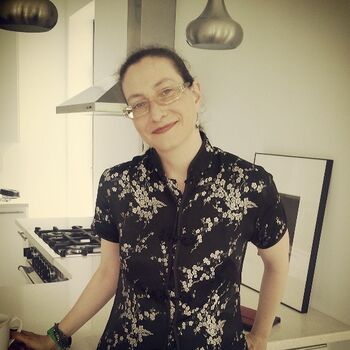 Adele Eisenstein (1964, New York City) is an independent curator, writer, editor, translator. Originally from New York, emigrated to Budapest in 1990. Studied psychology and film studies at the University of Rochester, French literature and art history at the University of Paris – Sorbonne, and architecture and interior design at the New School – Parsons School of Design, and School of Visual Arts. Worked for the Balázs Béla Studio and Toldi Cinema in Budapest; Soros Center for Contemporary Arts – Budapest; C3: Center for Culture & Communication (1995-2005). Founding editor of the Central European contemporary art journal Praesens (2002-2005); on the editorial board at the Museum of Fine Arts, Budapest (2005-2007). Curated the annual show From the Ikon to the Installation at the Benedictine Archabbey in Pannonhalma (2008). Curated the large-scale group show donumenta 2010 – Hungary: Liberation Formula throughout the city of Regensburg (D). Curator of Art-in-Fusion project of international artists living and working in Hungary (2012-2014). Curator of the group show Out of the Museum and Into the Street at Pavelhaus for the Steirischer Herbst 2013. Worked with Alma on Dobbin and Queensborough Community College Art Gallery in 2014 as researcher, registrar and curatorial assistant on the retrospective exhibition and catalogue of Hungarian artist József Jakovits, and transformation of part of a private collection into a public one. Commissioned and curated the site-specific project Traces and Tides of the Seaport, featuring the work of Portuguese artist Filipe Cortez, as part of the Out to See Festival in the South Street Seaport in 2016. Worked with Earth Celebrations on the Ecological City project in Lower Manhattan (2016-2018). Currently working on a number of independent curatorial projects in New York and internationally. Has written, translated and edited numerous books and catalogues, and hundreds of articles. Former Chair and Board member of Amnesty International Hungary (2007-2014). (2018) [2] [3]