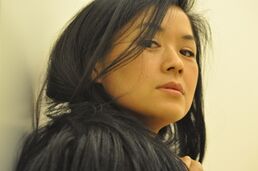 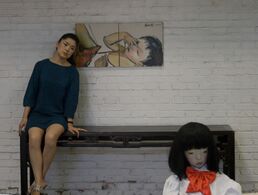 Primarily based in Beijing, Cui Xiuwen graduated in 1990 from the Fine Arts Department of the Northeast Normal University in Changchun, Jilin province and in 1996 received her Master of Fine Arts in oil painting from the Central Academy of Fine Arts (CAFA) in Beijing. Her works focused on notions of sexuality, girlhood, pregnancy, gender roles in China and spirituality.

In the 1990s she was part of Siren Art Studio, an all-women artists’ collective whose works openly dealt with feminist issues. Along with Li Hong (b. 1974), Feng Jiali (b. 1963) and Yuan Yaomin (b. 1961), Cui sought to have the female voice heard and find places to exhibit within the male-dominated art realm. One of her early paintings, shown at the first Siren group exhibition in 2000, Shuǐzhōng de méiguī yǔ bòhé [Rose and Fresh Mint, 1996-1997], features couples in sexualized positions.

The turn of the century marked a shift in medium for Cui. She began to explore issues of sexuality via videos and photographs. Her controversial work, Ladies Room (2000), was filmed with a hidden camera in the women’s toilets of a Beijing nightclub. This video captures young women touching up their makeup and their conversations. It explores the hidden sexuality in developing urban China. At first these women appear to be out for fun, but the editing reveals their occupations as escorts. Twice (2001) further explores the subject of female sexuality, in which the artist plays a young beauty engaging in phone sex.

Beginning with Sanjie [Three Worlds, 2003], Cui undertook a decade-long project documenting the life of a schoolgirl. In the photo, the same young girl in a school uniform is staged in thirteen different poses and arranged in a composition that alludes to Leonardo da Vinci’s Last Supper. Over the decade, she employed new models to portray the same subject at different ages and in new situations. Angel (2006-2008), the now teenaged girl is bruised and pregnant. This series alludes to the problems that arise from the traditional gender roles imposed on young women and concluded in 2010 with Existential Emptiness. In these images, the now young woman is again dressed as a schoolgirl. In a desolate winter environment, she is accompanied by a life-sized doll modelled to look like Cui.

Her later work became more abstract and meditative, merging Buddhist and philosophical texts and teachings with photography, sculpture and painting, such as Qin Se No. 3 (2014). These abstract paintings experimented with geometric lines and the fourth spatial dimension. In 2016 Cui exhibited her final solo exhibition, titled Light, at the Arthur M. Sackler Museum of Art and Archaeology in Beijing. This site-specific installation includes an illuminated tunnel that represented the body, heart, soul and life. The light of these four components signify the greatest goals of being across cultures.

Cui won many awards including the Most Influential Artist of the Year at the Award of Art China in 2010. Her works are collected by the Tate Modern, London; the Brooklyn Museum, New York; and the National Art Museum of China, Beijing. (Source)