Born 1945 in ROmania. Grigorescu is one of the very few multimedia artists in Romania who during the communist regime conducted visual research on the body: a taboo topic at the time. The artist’s body became work “material”—perceived as a “medium” and surface—onto which mental images are reflected. His body performances are to be seen as “post-happenings” with the emphasis no longer on the temporal dimension but rather on the photographic snapshot that, however, preserves a performative character. These works, like many others from the nineteen-seventies and eighties, would go public only much later. 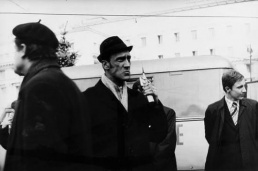 Snapshots taken during a rally in Bucharest, with a camera hidden on the artist’s hip, catching Securitate agents supervising the crowd and contrasting this view with that of with the ordinary participants, who were relaxed, tired, or bored.

In Dialogue with Ceauşescu the artist plays two opposing roles, in one of which he is wearing a mask with the face of Ceauşescu.