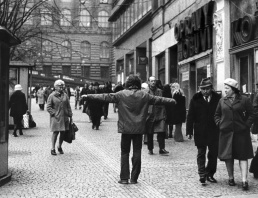 Jiří Kovanda, January 23rd, 1978. "I had a date with several of my friends... we were standing in the square talking… suddenly, I started to run... I was running over the square and got lost in one of the streets..."

Jiří Kovanda is a Czech artist.

Kovanda created actions and installations in Prague’s public spaces in the mid-1970s and early ’80s. Self-taught, he was one of the few Czech action artists to work outdoors in the urban environment following the 1968 invasion of Czechoslovakia by Warsaw Pact troops. Most of the country’s progressive artists had gone underground, to the privacy of ateliers and small groups of friends, or created art in rural settings, out of the sight of the watchful eyes of state security, their agents and informants. Through his ephemeral works, Kovanda discovered in his own way the power of the powerless, a concept analyzed by Vaclav Havel in his 1978 essay of the same title. (Source)