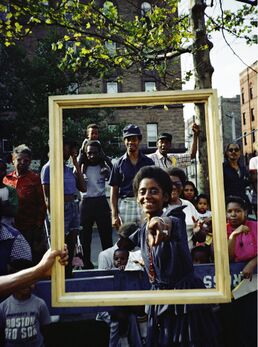 Lorraine O'Grady was born in Boston, Massachusetts, and graduated in 1956 with a degree in economics and Spanish literature from Wellesley College. Her path to the art world was unconventional. O’Grady worked as an intelligence analyst for the United States government, a professional translator, and a music critic before teaching a class on Baudelaire and Rimbaud at the School of Visual Arts (SVA) as a favour to a friend. It was at SVA in the mid-1970s where O’Grady turned towards art. Her first body of work, Cutting Out the New York Times (1977), a series of cut-up newspaper collages, L. O’Grady completed in 1977 when she was 43 years old. Three years later, O’Grady debuted Mademoiselle Bourgeoise Noire (MBN, 1980), her now renowned performance featuring a boisterous debutant clad in a white gown made of 180 pairs of white gloves. During her unsolicited enactments, MBN wielded a bouquet of white chrysanthemums that transformed into a cat-o-nine-tails as flowers were distributed to spectators. Once it was revealed, MBN beat herself with the whip, shouted a poem at the top of her lungs that ended with the exclamation “BLACK ART MUST TAKE MORE RISKS!!!”, and then promptly took her leave. Performing a dual critique on segregated New York art spaces and fellow Black artists, MBN first appeared at Just Above Midtown Gallery, an experimental hub for black performance artists, where she demanded more from the artists present at the opening for Outlaw Aesthetics (1980), and rebuked them for pandering to white audiences. She later performed various iterations of the piece throughout the city, including The New Museum, Kenkeleba House Gallery (The Black and White Show, 1983), and as part of the annual Afro-American Day Parade in Harlem (Art Is…, 1983).

Much of O’Grady’s early work focused on performance, and pieces such as Nefertiti/Devonia Evangeline (1980) and Rivers, First Draft (1982) drew on the artist’s personal experiences as a middle-class Black woman of bicultural West-Indian heritage and her rich family archive. According to the artist, these works are indicative of her concept “writing in space”.

Lorraine O'Grady, Body Is the Ground of My Experience (The Clearing: or Cortés and La Malinche, Thomas Jefferson and Sally Hemings, N. and Me), 1991/2019, archival pigment print on Hahnemühle Baryta pure cotton photo rag paper in 2 parts, 101.6 x 127 cm each.

After a return home to Boston to care for her mother between 1983 and 1988, O’Grady shifted her practice from outward facing and largely concerned with institutional critique to inward facing and newly self-reflexive. With this evolution came the crystallisation of her conceptual work with the form of the diptych, a development that also mirrors the artist’s transition from embodied enactments to two-dimensional works made for the gallery wall. The series Body is the Ground of My Experience (1991), Miscegenated Family Album (1980-1994) and Studies for Flowers of Evil and Good (1998) all employ the formal schema of the diptych to create meaning through compelling juxtapositions.

Two-decades later when O’Grady was invited to participate in the influential exhibition WACK! Art and the Feminist Revolution in 2007 (Museum of Contemporary Art, Los Angeles), the artist experienced another important shift in her practice towards the archive as a means of self-conscious resuscitation of her own forgotten art practice. During this time, the internet made rendering oneself visible a much more accessible endeavour than it had been in earlier decades, and O’Grady’s deployment of the World Wide Web provides an interesting model, and point of study, for born-digital archives, as well as online creative practices broadly.

The artist participated in the Whitney Biennial in 2010, and a major retrospective of her work was exhibited at the Brooklyn Museum of Art in 2021. (Source)