Margaret Mead was an American cultural anthropologist, who was frequently a featured author and speaker in the mass media throughout the 1960s and 1970s.

Mead earned her bachelor degree at Barnard College in New York City, and her M.A. and Ph.D. degrees from Columbia University (1929). She was both a popularizer of the insights of anthropology into modern American and Western culture and a respected, if controversial, academic anthropologist.

Mead was married three times. Her first husband (1923–1928) was American Luther Cressman, a theology student at the time. Her second husband was New Zealander Reo Fortune, a Cambridge graduate (1928–1935). Her third and longest-lasting marriage (1936–1950) was to the British anthropologist Gregory Bateson with whom she had a daughter, Mary Catherine Bateson. Her encounter with Bateson is described in the chapters 16 and 17 of her autobiography.

Mead studied anthropology with Franz Boas and Ruth Benedict at Columbia University before earning her Master's in 1924. Boas is considered by some specialists as the ‘father figure in visual anthropology’ (Ruby 1980, Jacknis 1984).

Along with Bateson, Mead was a pioneer in the use of film and photography in her ethnographic research. It helped to underscore the importance of visual evidence in ethnographic research as well as the value of images in conveying crosscultural information to the public. Not only was Mead one of the earliest anthropologists to integrate visual methods into her research, she was also one of the first anthropologists to focus on the study of visual communication, including nonverbal communication, kinesics (the study of body motion), and proxemics (the study of territoriality and personal space), and she pioneered teaching anthropology courses on culture and communication (both verbal and visual). 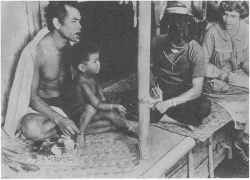 Drawing upon her experiments among the Arapesh made before the 1930s, Mead came up with a system of "running field notes", essentially a chronological narrative of observations. Each photography was noted in this record, with its place in the ongoing social action, as well as the photographer's relative position. The running field notes were supplemented with a daily diary in which were recorded all the different kinds of activities in the field: photography, events ob- served, births and deaths, illnesses, letters and visits, etc. Although parts of this system of record keeping were present from the start, it was not until 12 May 1936 that the scenario method was begun, and not all these categories were noted in all notes.

Mead and Bateson arrived in Bali in March 1936 for a two-year stay during which they innovated their use of photography and film as ethnographic media. In the Bali research Mead was responsible for much of its substantive focus, as well as its vast scale and level of detail, while Bateson took all the pictures, devised innovative forms of notes, and did most of the final photoanalysis. Their stay generated a prodigious amount of data, including about 25,000 photographs and 22,000 feet of film. In June 1936 they moved to Bajoeng Gede, a small village in the mountains. In March of 1938, feeling the need for comparative material, they returned to Bateson's former field site among the latmul on the Sepik River in New Guinea. Here over eight months they shot about 8,000 stills and 11,000 feet of film, searching for material that could match their Balinese data. Around 1950 Mead returned to the material, assembling another photographic study and a series of six films made by Bateson.

The American Museum of Natural History used her name and image for their annual showcase of new documentary film and video. The Margaret Mead Film Festival began in 1976 in commemoration of Mead’s seventy-fifth birthday and since then has grown in size and importance.