Robert Smithson (1938–1973) was an American sculptor and writer associated with the Land Art movement. His large-scale sculptures, called Earthworks, engaged directly with nature and were created by moving and constructing with vast amounts of soil and rocks.

Excerpted from 'Biographical Note' printed in Smithson, The Collected Writings, ed. Jack Flam, 1996, pp xxvi-xxviii, itself a revised version of a text written by Nancy Holt, Philip Leider and Sol LeWitt for the first edition of the book (published 1979).

In 1956, one week after graduating from high school, Srmthson joined the army reserves, where he was assigned to Special Services. His six-month period of active duty was spent in Fort Knox, Kentucky, where, after basic training, he was made artist-in-residence, doing posters for the camp and murals for the mess hall. He eventually obtained a discharge from the reserves on the grounds that continued service would ruin his creativity. Between 1956 and 1958 he hitchhiked extensively around the United States and Mexico.

Smithson's first one-man exhibition was of abstract paintings at the Artists Gallery, New York City, in 1959. In 1961 he had a one-man exhibition of paintings at Galleria George Lester, Rome, and in 1962 a one-man exhibition of assemblage works at the Richard Castellane Gallery, New York City. After this exhibition, he withdrew from the art world for a period of introspection and assessment, marrying the artist Nancy Holt in 1963. Smithson re-emerged in 1965 by showing sculpture at the Daniels Gallery, where he met various leading American sculptors of the 1960s. His first published writing on art appeared, and from this time on he continuously exhibited and wrote.

In 1966 he joined the Dwan Gallery, New York City, where he had four one-man exhibitions of sculpture between 1966 and 1970. At about the same time (1966-1969) he began excursions, usually with friends, sometimes alone, to New Jersey's decaying urban sites, industrial wastelands, and abandoned quarries. Out of this new consciousness of the postindustrial terrain emerged Smithson's Non-Sites, which created a wholly new premise for contemporary sculpture. It was in 1966 also that he proposed his first earthwork, Tar Pool and Gravel Pit, for Philadelphia, and other earthworks for the fringes of the Dallas-Fort Worth Regional Airport, as part of his work as an artist-consultant with an architectural firm that was competing for the airport design contract.

In the summer of 1968, he traveled to the deserts of California, Nevada, and Utah seeking sites for art. In 1969, in order to build a large work of art, he negotiated successfully with the government of British Columbia for a lease on an island near Vancouver. Later, however, the government's permission was rescinded, and the work was never built. Smithson was able, in 1969, to build Asphalt Rundown in a quarry near Rome, Italy. In 1970 he completed Partially Buried Woodshed, Kent, Ohio, and the Spiral Jetty in the Great Salt Lake, along with a film of the same name that revolves around that work.

From 1970 onward Smithson made many trips around the United States searching for sites for his work—the Florida Keys, Texas quarries, Salton Sea in California, Maine, and to islands on the Atlantic coast. He proposed many art works in the landscape that were ultimately rejected by various local sponsoring institutions. By reclaiming land in terms of earth art, he felt that art could be economically and politically integrated into society. In his mind this could best be accomplished by working with mining companies to reclaim devastated strip-mined land as earth art.

In 1971 he built Broken Circle-Spiral Hill in a quarry near Emmen, Holland, which was scheduled to be abandoned and returned to the people of the area. With this work Smithson realized his concern for recycling a mined site, in this case a sand quarry, into an art work. His desire to have art be a necessary part of society was gratified when the people of Emmen voted to keep and maintain the work after its completion.

From 1971 to 1973, he wrote to and visited many strip-mining companies, making drawings and proposals for landscape works. He also wrote public statements that pointed out the limiting confines of the art establishment. The mining industry unfortunately was not very far-sighted, and rejected Smithson's proposals.

Finally, a few weeks before his death, Smithson visited Creede, Colorado, where he had his first opportunity to propose a project for a tailings site to an interested mining company. Since the company was not ready to begin the project right away, Smithson traveled to a desert lake he had heard of in Amarillo, Texas. He decided that it was an excellent site for what was to be his last work, Amarillo Ramp, which was commissioned by the owner of the property. After trying out various ideas and dimensions, Smithson staked out Amarillo Ramp in its final form. On July 20, 1973, while he and a photographer were photographing the staked-out work from the air, the plane they were in crashed on a rocky hillside a few hundred feet from the site of the art, killing the pilot, the photographer, and Robert Smithson.

Almost all of the articles listed below are also reprinted in their original English versions in Smithson, The Collected Writings, 1996.

Almost all of the interviews listed below are also reprinted in their original English versions in Smithson, The Collected Writings, 1996. 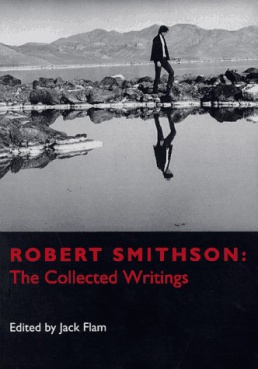