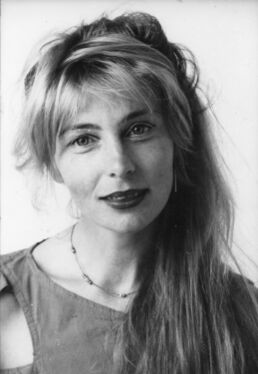 Between 1978 and 1981, Tyszkiewicz was active in the circle of artists gathered around the Współczesna Gallery in Warsaw. She was a co-founder of the Association of Film Makers Remont (1980). Apart from films, she also created performances, drawings and paintings.

In 1982 Tyszkiewicz and her husband Sosnowski (they married in 1977) emigrated to France, settling in Paris. There she developed her own technique using dressmaker’s pins. Tyszkiewicz would stick thousands of pins into paper, canvas and other materials. Sometimes she complemented the work with paint or materials such as cotton wool. Initially the artist stuck to two dimensions and large formats for these works, but after some time, however, she began to create spatial compositions. She used raw wood, metal and second-hand objects. These works indicate the physical effort that the artist had to put into creating these objects. Over the course of her approximately forty-year artistic career it is possible to trace significant change in the mediums she used, but despite this, the artistic consistency is striking. The artist described her work as radically subjective, based on intuition and on the experience of her body. Especially evident is the artist’s sensual relationship with matter, which can be seen as a combination of adoration and struggle.

Tyszkiewicz’s work has so far been read in the context of experimental film of the neo-avant-garde and of feminist art, though the artist herself never expressed any alliance to feminism. She emphasised individualism and trust in one’s own corporeal experience rather than interest in the social or political context.

Tyszkiewicz died shortly before the opening of her retrospective exhibition at Museum of Art in Łódź, Poland. Her works are held in public and private collections, including the Centre Pompidou, the Musée d’Art Moderne de Paris, Musée de la Manufacture Bohin, the Art Museum in Łódź, and the Zachęta National Gallery of Art and Museum of Modern Art in Warsaw. (Source)