Difference between revisions of "Tomáš Staudek" 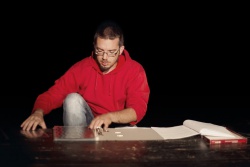 Born 1975 in Prague, lives in Brno, Czech Republic. Lecturer, researcher and graphic designer with computer art and science roots. Graduated in computer science from the Faculty of Informatics, Masaryk University in Brno (M.Sc 1998, Ph.D 2003). In 2002 held a doctoral fellowship at the Digital Media Group, University of Bristol, performing research in computational aesthetics.

After Ph.D. graduation worked as a lecturer and researcher at the Faculty of Informatics teaching computer-aided art (1999–2006), 3D modeling (2002–2006) and digital photography (2003–2006). In 2008–2009 he was teaching internet art at the Interactive Media Theory programme, Faculty of Arts, Masaryk University.

Co-founder of the Graphic Design & Multimedia Studio (2002) participating in various projects and events bringing art and science together. Member of editorial board at the IM6 journal for new media and information technology culture (2004–2005), member of the International Association of Art and the Union of Visual Artists of the Czech Republic (since 2006). Co-founder of non-profit cultural association Napříč.cz and member of its endowment board (since 2007). Involved in Multiplace new media culture festival as a coordinator of Student Match forum (2008).

Since 2007 has been working as freelancing lecturer and graphic designer. Currently enjoys teaching computer-aided art at the Faculty of Information Technology, Brno University of Technology (since 2005). His research interests include revealing aesthetic potential of computer-aided imagery, examining computational background of artistic expression appraisal and proposing algorithmic criteria for aesthetic evaluation.