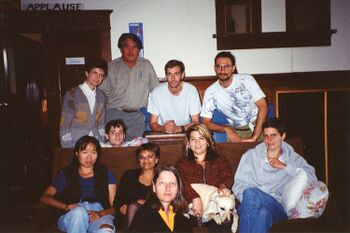 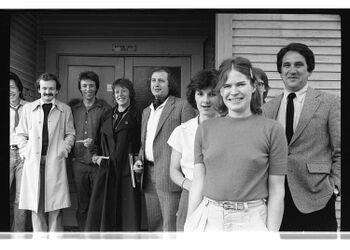 Western Front is a non-profit artist-run centre in Vancouver, Canada. It supports a multidisciplinary program that provides opportunities to artists working across music, media art, visual art, performance, and literature to create and present work. Through commissions, exhibitions, performances, concerts, publishing, residencies, and workshops, Western Front promotes public exchange at a local, national and international level. It also preserves and provides access to an ever-growing audio-visual archive that documents the organization’s history of artistic programming and production.

Western Front's director Susan Gibb came to Western Front in 2019, from the position of Curator at If I Can’t Dance, I Don’t Want To Be Part Of Your Revolution in Amsterdam, where she had worked since 2013. (2022)

Western Front was founded in 1973 by artists Kate Craig, Glenn Lewis, Eric Metcalfe, Michael Morris, and Vincent Trasov, composer Martin Bartlett, architect Mo van Nostrand, and writer Henry Greenhow, who collectively purchased the Knights of Pythias Lodge at 303 East 8th Ave as a communal space in which to live and work. They incorporated as a non-profit society in 1974, and named the organization Western Front in reference to the building’s pioneer-like façade, its geographic location on the West Coast of Canada, and their pursuits with avant-garde art.

Together, they conceived of Western Front as a place where multidisciplinary exchange, experimentation, and a synthesis of art and life could occur. While pursuing their own individual artistic practices, the founding artists and their friends took on curatorial, administrative, and technical roles. They invited local and international artists to visit, and create and present work. Western Front quickly became an important centre for visual artists, poets, musicians, dancers, and performance artists who were circulating in the burgeoning networks of correspondence art and artist-run centres.

The disparate activity at Western Front was unified by a shared attitude of resistance to the “official” art market-system in favour of artists’ self-determination, and drew inspiration from the anti-art ideas of Fluxus, including Robert Filliou’s concept of the Eternal Network; the bohemian ethos of West Coast counterculture; and emergent avenues of art creation and dissemination offered by new media and telecommunication technologies. These guiding concepts are manifest in such endeavours as the famous Mr. Peanut mayoral campaign of 1974, as well as pioneering programs focused on telecommunications, computer graphics, and media art production. Western Front’s music program maintained a focus on non-Western compositional and philosophical practices, Jazz music, experimental vocal performance, and electro-acoustic composition, and was instrumental in supporting the New Orchestra Workshop Society, which held weekly workshops at Western Front from 1979-2020, and in the foundation of the Vancouver Community Gamelan, which was situated at Western Front from 1986-2019. Frequent poetry and literary readings were followed by the creation of Front Magazine (1985-2011), which developed as an alternative communication channel for advertising Western Front’s events, while inviting submissions, and then grew into an editorial publication.

Over the 1980s, the original founders increasingly stepped back from their active roles programming and administering the organization, with many also moving their homes out of the building. In their place, they invited emerging curators and artists to take on these roles. As a result, Western Front became a significant proving ground for emerging curators to develop their ideas and establish their practices.

Today, Western Front remains responsive to the changing conditions of the arts ecology, with the organization’s structure and programs continuing to evolve. (2022)