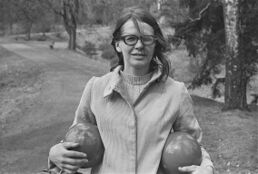 Zorka Ságlová was born in Humpolec, but spent most of her life in Prague. In the years 1960-1966 she studied in the textile studio of Professor Antonín Kybal at the Academy of Arts, Architecture and Design in Prague. After graduation, Ságlová worked on paintings and relief structures, following geometric abstraction and kinetic art. Her spatial objects formed by colourful geometric elements were displayed in 1968 at Nová citlivost (New Sensitivity), an exhibition considered a turning point in post-war Czech art.

At the end of the 1960s, she moved her artistic activities outside the gallery, organising several performative outdoor actions in which her family and friends took part. In the years 1969-1972 she organised four open-air events, documented by the photographer Jan Ságl (1942), whom she had married in 1964. These collective performances combined land-art aesthetics with an absurd sense of humour and references to local legends and Czech history. Ságlová contributed to the formation of unofficial Czech culture and maintained close contacts with the underground music community. Among the participants of her actions were her brother, poet and dissident Ivan Martin Jirous with his wife, art historian Věra Jirousová and members of music groups The Primitives Group and The Plastic People of the Universe. She collaborated with musicians designing stage decorations and costumes for their concerts.

In 1969 Ságlová’s first solo exhibition took place, at the Václav Špála Gallery. Inside the gallery considered to being temple of art, she placed bales of hay and straw, which met with criticism from the official media and most of Czech artistic community. The artist was excluded from the official art circulation and could not exhibit in Czechoslovakia for almost twenty years. However photographic documentation of her performances were shown at exhibitions in Italy, France and the United States.

In 1973, because of the worsening political situation, the so-called normalisation, Ságlová withdrew from the public field of art for several years. She devoted herself to weaving large tapestries in her private studio. A few years later the main motif of her artworks became the figure of a rabbit, because of its complex significance in various cultures; it would accompany her until the end of life. The animal appeared as a subject of tapestries, in multiplied form in structural painting compositions, in photographic series and as a living participant in action drawings. The last time she returned to land art was with the action 40 rabbits in 1988, when as part of the event Wind and Object she installed white flags with a rabbit silhouettes on a wooden structure.

Her major retrospective exhibition took place in 2006 at the National Gallery in Prague and the Moravian Gallery in Brno and was curated by Milan Knížák and Jiří Valoch. (Source)