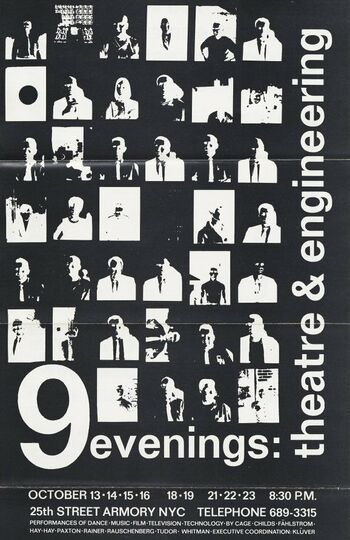 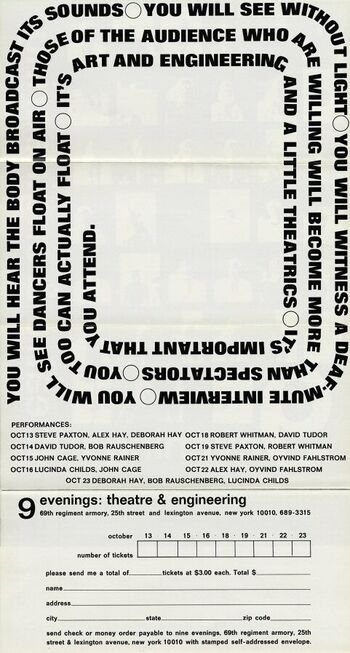 9 Evenings: Theatre and Engineering was a series of performances from 13–23 October 1966, where artists and engineers from Bell Laboratories in Murray Hill, New Jersey collaborated on what was to be the first event in a series of projects that would become known as E.A.T. or Experiments in Art and Technology.

9 Evenings: Theatre and Engineering was conjured up by Robert Rauschenberg and Billy Klüver and was originally intended to be presented as part of the Stockholm Festival of Art and Technology in 1966. But when the festival's negotiations fell through, Billy Klüver moved the event to the 69th Regiment Armory and called it 9 Evenings: Theatre and Engineering. The participants consisted of 10 artists and some 30 engineers to create a blend of avant-garde theatre, dance and new technologies.

9 Evenings was the first large-scale collaboration between artists and engineers and scientists. The two groups worked together for 10 months to develop technical equipment and systems that were used as an integral part of the artists’ performances. Their collaboration produced many "firsts" in the use of new technology for the theater, both with specially-designed systems and equipment and with innovative use of existing equipment. Closed-circuit television and television projection was used on stage for the first time; a fiber-optics camera picked up objects in a performer's pocket; an infrared television camera captured action in total darkness; a Doppler sonar device translated movement into sound; and portable wireless FM transmitters and amplifiers transmitted speech and body sounds to Armory loudspeakers.

"The idea of the artist-engineer collaboration materialized with 9 Evenings: Theatre and Engineering, a group of collaborative performances that took place from 13 to 23 October 1966 at the 69th regiment Armory on Lexington Avenue in New York City.

On January 14, 1966, the group of artists and engineers began to meet. At the first artist-engineer meeting, I told the artists to ask for anything they wanted and the engineers responded with suggestions on how to accomplish their ideas. These meetings lasted through March, and we collected more than seventy artists' requests. Not all of these were realized.

The engineers went to work. As time went on one engineer was assigned to each artist depending on what the artists' project was and what the engineer's speciality was. Other engineers worked on equipment and systems that would be used by more than one artist.

The 69th Regiment Armory on Lexington Avenue at 25th Street was empty and available. The many Armories located around New York City serve as headquarters and practice halls for local National Guard Units, who still hold drill practice there. This particular Armory had been the site of the famous Armory show of 1913, that introduced modern European art to the United States, and where Marcel Duchamp showed Nude Descending the Staircase. It was a very exciting space, although the acoustics were terrible. The reverberation time for sound was 6 seconds. The artists liked the idea of its size. It would now be possible to reach a much larger audience than they had had at Judson Church or at the downtown Happenings. Audience size had become an issue for them.

We moved into the 69th Regiment Armory to set up on October 8th, with only five days to the first performance. During the next five days we installed the electrical system for the stage lights and other equipment, laid miles of cable, installed the sound system with 12 speakers in the balcony surrounding the central space, and set up the bleachers for the audience. The artists held rehearsals as best they could.There were endless conferences. The Armory had a vaulted steel roof, 40 meters high in the center. It was a challenge.

9 Evenings left a permanent impression on the artists who participated and on the many younger artists who were in the audience. It has become a classic event."
(Source)