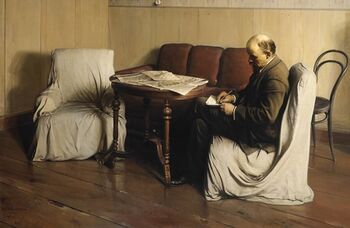 The Association of Artists of Revolutionary Russia (Ассоциация художников революционной России, Assotsiatsia Khudozhnikov Revolutsionnoi Rossii, 1922-1928), later known as Association of Artists of the Revolution (Ассоциация художников революции, Assotsiatsia Khudozhnikov Revolutsii or AKhR, 1928-1932) was a group of Soviet artists. Diverse members of the group gained favor as the legitimate bearers of the Communist ideas into the world of art, formulating framework for the Socialist Realism style.

This section is sourced from Christina Lodder, Russian Constructivism, 1983, pp 184-185.

The formation of the Association of the Artists of Revolutionary Russia (Assotisatsiya khudozhnikov revolyutsionnoi Rossii, AKhRR) in 1922 was a major factor in the revitalisation of Realism in Russia after the October Revolution. The society was established following a discussion at the 47th exhibition of the Wanderers (Peredvizhniki) on 4 March 1922.[1] Its president, Radimov, declared that "artists in our society must depict accurately in painting and sculpture the events of the Revolution, they must portray its leaders and participants, and illustrate the role of the People -- the simple toilers -- the workers and the peasants".[2]

Narkompros and INKhUK were attacked for their Futurism and Katsman accused those artists (who had appropriated the epithet 'left' for themselves) of being politically reactionary because their art was that of the "Imperial French bourgeoisie".[3] From the first, AKhRR considered the task of revolutionary painting to be the depiction of revolutionary events, and combined this with an uncompromisingly Realist stance and a stern rejection of all artistic expreimentation. The artistic credo of AKhRR was "hereoic realism", as it declared at its frist exhibition in May 1922: "The revolutionary day, the revolutionary moment, is an heroic day, an heroic moment, and we must now in the monumental forms of heroic realism reveal our artistic experience."[4] No precise definition of "heroic realism" as an artistic method was formulated. In practice it entailed depicting with documentary accuracy themes related to the Revolution and social reconstruction, and aggressively opposing any formal artistic investigations. A fine though not typical example of such an approach is the famous painting by Brodsky, Lenin at Smolny of 1930.

Its dedication to Realism as an artistic style and the Revolution as subject matter quickly gained AKhRR official support. Having assured the Central Committee of the Party of its allegiance, AKhRR was advised by that body to go into the factories and depict the workers in their everyday life.[5] Krupskaya, who had condemned the Futurists as "spokesmen for the worst elements in the art of the past",[6] gave her support as head of Glavpolitprosvet to the venture. Skachko, the head of Glavpolitprosvet's art department, was closely associated with the group and gave them their name. Finally in 1928 AKhRR received the ultimate stamp of official approval when the entire Politburo made an official visit to its tenth exhibition--the first time that any exhibition had been accorded such an honour.[7]

AKhRR exhibitions were frequent and they concentrated on specific themes, such as the Red Army (their second, fourth and tenth exhibitions, 1922, 1923 and 1928 respectively) and revolutionary life and work (third, sixth and seventh exhibitions held in 1922, 1924 and 1924 respectively). The revolutionary and contemporary nature of their themes and the realistic style of their works ensured them a ready market. The Red Army Museum and the Museum of the Revolution were their main patrons, utilising AKhRR works to supplement scarce photographic material for their displays.[8] Despite well-founded criticisms levelled at both the artistic quality of AKhRR (their technical prowess was often lamentable) and their aggressiveness, this official patronage ensured their economic viability and continued existence. The association played in the field of the visual arts a role equivalent to that of RAPP in literature.[9] It was the most powerful of the Realist groups dominating the artistic situation at the end of the 1920s in Soviet Union and spearheading the attack on those artistic innovations of the avant-garde, collectively termed Formalism.