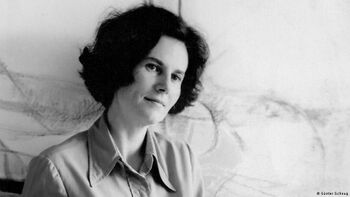 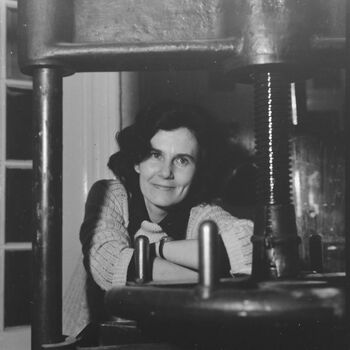 Adina Caloenescu (18 February 1934, Buzău - 13 October 2011, Düsseldorf) was a Romanian painter, graphic artist and printmaker. She was a member of the Artists Union of Romania since 1973, the Malkasten Association, and the BBK of Rhine-Westphalien, Düsseldorf, Germany.

She made her debut at the 1966 Biennale, and then participated in other biennials, youth exhibitions and graphic exhibitions. In 1967 she exhibited in Warsaw. Exhibited in Bucharest in 1968 with painting, in 1970 with graphic art and in 1974 with constructive art. Between 1972 and 1986 she took part in international graphic and drawing exhibitions in Baden-Baden, Barcelona, Fredrikstad, Grenchen, Krakowia, Ljubljana, Mulhouse and other group exhibitions.

In 1980, she settled in Germany and produced works that combine mathematics research and constructivism.

After 1998 she devoted herself to the study and practice of esoteric Japanese Buddhism, which would influence her artistic approach.

"Her experiences are situated in a post-Cubist line, and in some ways, she also approaches the coordinates of abstract expressionism. At the 1974 exhibition, the concern for construction in direct relation to architecture, in the spirit of the constructivism of Gabo and Pevsner, became dominant, indicating the stability of certain evolutionary parameters." (Octavian Barbosa, 1976)