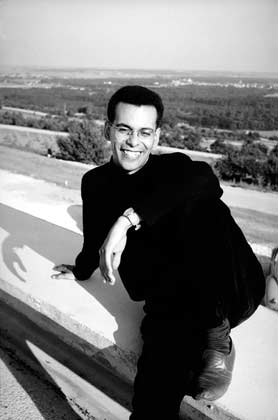 Almir Da Silva Mavignier (1 May 1925, Rio de Janeiro, Brazil - 3 September 2018, Hamburg, Germany) was a visual artist, graphic designer, pedagogue. Prior to emigrating to Europe from his native Brazil, he and Abraham Palatnik founded a studio that held painting classes for patients of psychiatric hospitals. At the time, he was interested in Gestalt theory and began making connections between science and art. After completing his studies at the Ulm School of Design under Max Bill, he set up his own graphic design studio and also became affiliated with the Zero group, an experimental collective from Düsseldorf that ran a magazine of the same name. The group was invested in the idea that art should no longer serve as the domain of emotions and subjective expression. Mavignier believed that art and design are related, distinguished only by their goal, which is why his career as a designer and an artist developed in parallel. Mavignier is behind an original technique of poster art, which is based on the repetition of a single graphic, geometric element. The resulting pattern, and the product it’s meant to advertise, is easily remembered. At the beginning of the 1960s, he began collaborating with the Yugoslavian community of artists active in the field of Concrete Art and Op Art. He contributed to the organization of the first New Tendencies international exhibition in Zagreb in 1961. (Source)