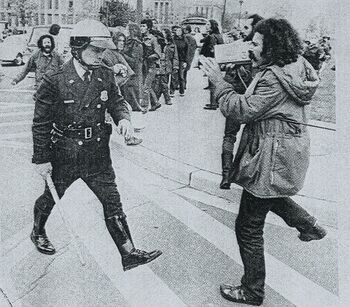 David Cort was a founding member of the New York based Videofreex, a pioneering collective of media activists formed in 1969 to explore communication processes. The countercultural collective's work was grounded in the conviction that access to portable video equipment could provide an alternative voice to the monolith of network television. To that end, Videofreex created the nonprofit organization Media Bus, the media center Maple Tree Farm, and an experimental low power television station, Lanesville TV, in upstate New York. Cort's individual work explores documentary and performance, and includes video theater, interactive environments, and installations.

Cort was born in 1935. He graduated from Brandeis University. He is a recipient of the American Film Institute Independent Filmmaker's grant, and he has taught at the Massachusetts Institute of Technology; the University of California, Los Angeles; and California State University, Dominguez Hills. He is currently an independent producer with David Cort productions. He lives in East Weymouth, Massachusetts.