Ede Kozics (Eduard Nepomuk Kozič) was a 19th-century photographer. His name and life is most closely associated with his famed photo studio in Bratislava (then Pressburg) which had been operated by his family for over seven decades.

Ede Kozics was born in 1829 in Dubnica nad Váhom, Kingdom of Hungary (today Slovakia) to a poor family. His thin and weak body was not suited to do heavier work.[1]

As an unsuccessful candidate for study in the seminary he was trained in ribbon-making and used to make silhouette portraits (cut from lightweight black cardboard and mounted on a pale background [5]). In 1847, he first encountered daguerreotype and found his lifelong passion. He received training from traveling photographer Johann Bubenik who also sold him the equipment (Bubenik was making daguerreotypes in Bratislava in 1847 [6]). Soon he also learnt calotype (talbotype) technique and collodion process from Andreas Groll in Vienna between 1847–50[2], as well as coloring technique. 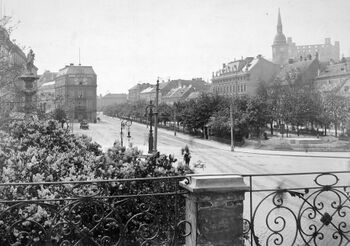 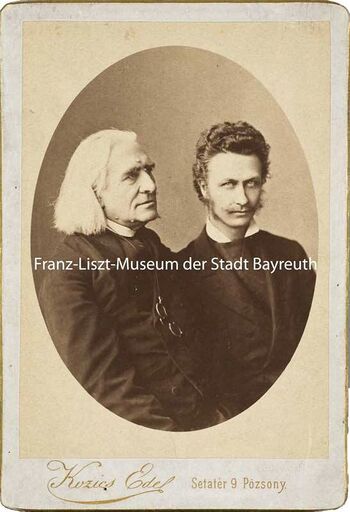 In 1850 he opened his first studio in the garden pavillion of Slubek's house on Gaisgasse (today Kozia street 33) in Bratislava.[3] This studio is considered to be the first out of ten studios operating in Bratislava in the 1850s.[4]. It needs to be added that opening dates of photo studios of Jacob Marastoni, David Adler and Jozef Benický are unknown. Also, at that time, or earlier, traveling daguerreotypists Karol Bubnik and Carlo Naya were operating in Bratislava.[5]</ref> In his early years Kozits photographed Captain Ernest Kluger, graf Wittmann von Denglatz and young grafs Sečen's among others.[6] In 1856 he moved to a more populated location on Promenade 34 (today Hviezdoslavovo námestie) nearby Carlton hotel.[7] After temporary relocation (on 1 June 1868 to the house of Baron Sina on Promenade 33), Kozics studio opened on 1 October 1868 in a newly built house on Promenade 2 (later renamed to Sétatér 9, Kossuth Lajos Platz/Kossuth Lajostér 9, today Hviezdoslavovo námestie 4 [8]), next to the Hotel zum grünen Baum.[9][10][11][12] The house served as home to him and his family and also functioned as a museum, gallery, free mason lodge[7] and salon, which was known for its lively social happenings. Kozics hosted several concerts of his close friend Franz Liszt and made a number of his portraits. Photo studio was located on the ground floor together with permanent exhibition of Kozics' collection of a wide range of photo apparatuses.[8]

Portraits were Kozics specialty, among his clients were Bratislava's most prominent figures. He also photographed city sights and suburbs, from the 1860s particularly in then popular CDV format (cards). Just before its demolition, in 1870 he made series of photographs of so called coronisation hill[13] on Danube river bank and collected them in the artistic photo album Vitam et sanquinem, which was given as a gift to the court in Vienna.[9]

Kozics had significant technical skills. He was fast in adopting cutting-edge photo techniques of his day including calotype (c1850) [14], panotype (c1856) [15], and chromotype (late 1870s) [16]. He developed his own method of color photography; was among the first to make lifesize photographs; invented and patented[10] a way to expose photographs on canvas, elephant bone, porcelain, wood, glass and email.[11]

Kozics also ran a private school of photography and was influential for the whole generation of photographers.

He died of a sudden heart attack in 1874 and was buried in widely attended funeral at Bratislava's Ondrejský cintorín.[12] Since the 1990s Bratislava has a street named after him.[13]

After his death, the studio continued to be operated by his wife Karolina Kozics-Helle (1838–1899, they married in 1855[14]) who expanded the studio ouvre to postcard production and service for artists. Her specialisation was photomontage. They had three kids: Karolína Eleonóra Ema (3.10.1856–?), Pavlina Jozefina (27.6.1859–?) and Eduard František Xaver (2.1.1864–1900), all born in Bratislava.[15] Karolína and František were both photographers and painters, Karolína focused mostly on photo reportage (eg. Požiar Podhradia 1913 series). She operated the family studio until 1926[16] when it was taken over by the firm Boceky and Valentik. Afterwards it was changed into a bank, today the building is part of the American Embassy. Artefacts from the studio are archived in museums in Bratislava and Košice. Kozics' photographs are part of the collections of Matica slovenská, National Museum in Martin, or Slovak National Gallery in Bratislava.