Nam June Paik’s first major exhibition was held from 11 to 20 March 1963 in Galerie Parnass in Wuppertal run by architect Rolf Jährling in his private residence. The title Paik chose indicates his transition from music to the electronic image. Four ‘prepared’ pianos, mechanical sound objects, several record and tape installations, twelve modified TV sets, and the head of a freshly slaughtered ox above the entrance awaited visitors. The show ran for ten days and opened for two hours daily between 7.30 and 9.30pm.

Newspaper reports indicate that visitors to the show, which was distributed over the entire house (and did not stop at the private quarters of the Jährling family), experienced the show and its setting as a ‘total event’, many guests taking no more than a perfunctory glance at the room with TV sets. Today, this room is seen as the starting point of the video art that later developed, although Paik, not yet having access to video equipment, was still modifying inexpensive second-hand TV sets to distort the TV programmes as they were being broadcast. Germany had only one TV station up to 1963, and it broadcast for no more than a few hours each evening – possibly explaining the late opening-time of Paik's show. Unlike the Fluxus actions which took place concurrently, Paik’s project did not attract TV coverage. 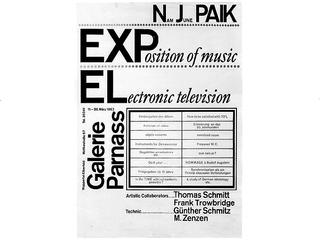