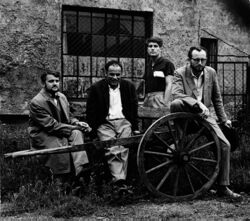 The foundation of the Gruppe SPUR followed a joint exhibition held in autumn 1957 in the Pavillon im Alten Botanischen Garten in Munich by the painters Heimrad Prem (1934-1978), Helmut Sturm (1932-2008), Hans-Peter Zimmer (1936-1992) and the sculptor Lothar Fischer (1933-2004). They devised the group's name in January 1958 when thinking about the tracks of their own footprints in the snow. Their shared goals related to their criticism of Art informel, which they regarded as devoid of content and too private.

In the 21 points of their first manifesto of November 1958 they rejected aestheticism, technique as an end in itself and abstraction in art. The members of Spur were encouraged and helped by Asger Jorn, who in 1959 introduced them to the Galerie Van de Loo in Munich, which thereafter exhibited and supported the group, as did the artist and art critic Hans Platschek. In 1959 Spur was accepted by the International Situationists in Paris, and in 1961 the group wrote their Januar-Manifest. The Bavarian Ministry of Culture refused to allow an exhibition by them in the Haus der Kunst in Munich. The periodical Spur ran from August 1960 to January 1962 (7 numbers).

In February 1962 they were expelled by the International Situationists, and in the same year there were two court hearings resulting in prison sentences for supposed blasphemy; later reduced on appeal. In 1965 they painted collaborative gouaches, and started to cooperate with the 'Wir' group, founded in Munich in 1959; in spring 1966 the two groups were amalgamated to form the 'Geflecht' group. (Source)

Spur. Organ der Situationistische Internationale was Gruppe SPUR's magazine published in 7 numbers between August 1960 and January 1962. The issue 6 was published in Drakabygget, Sweden.

The above PDFs were sourced from 84 GHz, HT Ellef.