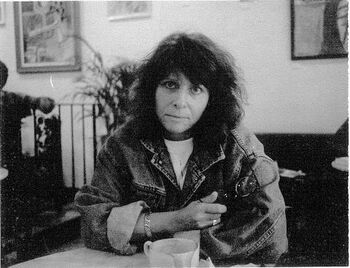 Judy Hoffman has worked in film and video since the 1970s. She was active in the Alternative Television Movement experimenting in the use of small format video equipment. During the 1973 International Visual Anthropology Conference, she assisted French ethnographer and filmmaker Jean Rouch, and became deeply influenced by cinéma vérité and the idea of shared anthropology. Hoffman played a major role in the formation of the independent documentary group Kartemquin Films, was an original collective member and camera assistant on their early films. She was the Associate Producer on Golub, which debuted at the New York Film Festival. She is still an active member of Kartemquin.

The first woman film Camera Assistant in Chicago, Hoffman was a member of IATSE, and worked on feature films, such as The Breakfast Club, but ultimately chose documentary. Her credits include numerous PBS series, including Daley: The Last Boss, for "American Experience," and Ken Burns' Baseball, Frank Lloyd Wright, and Jazz. A major focus of her work has been with the Kwakwaka'wakw First Nation of British Columbia, producing films and videotapes about the reclaiming of Native culture. She was the Associate Producer on the award-winning Box of Treasures, a film tracing their efforts to repatriate cultural artifacts. For over ten years Hoffman directed a video training program on the N'amgis Reserve so that the Kwakwaka'wakw could make their own videos, and she continues to work with them on their projects. Currently over 200 videotapes are being archived by the U’mista Cultural Center and she was formally adopted in a potlatch.As the Acting Director of The Documentary Center of Columbia College in 1996, she along with Ronit Bezalel developed Voices of Cabrini, about the destruction of public housing in Chicago. They recently completed 70 Acres in Chicago, a follow-up to Voices, which explores issues surrounding mixed income housing in Chicago. 70 Acres premiered at the Black Harvest Film Festival and will air on PBS’s America Reframed this spring. Her eclectic approach to documentary film led her to direct a behind the scenes documentary on Britney Spears, called Stages: Three Days in Mexico, that was shot by Albert Maysles. She, in turn, was a cinematographer on Maysles' The Gates, a documentary on Jeanne Claude and Christo's Central Park installation, which aired on HBO in 2006. Hoffman has worked with noted feminist directors, such as Jill Godmilow, Michelle Citron, and has cinematography credit on Howard Zinn: You Can't be Neutral on a Moving Train; Sacco and Vanzetti; and Nelson Algren: The End is Nothing, The Road is All. She has also produced, directed, and shot museum and gallery installations for the Shedd Aquarium of Chicago, the Smart Museum of Art, and the Mary and Leigh Block Museum of Art. She received a VOICE Media Activism Award from Chicago's Center for Community and Media in 1994, was a Visiting Artist at Middlebury College in 1997, and was the Guest Artist at the Big Muddy Film Festival in 1999. She was awarded the 2004 Nelson Algren Committee Award for “community activists making a significant contribution to Chicago life”.

Hoffman received an MFA from Northwestern University, and holds an appointment at the University of Chicago, as Professor of Practice in The Arts, in the Department of Cinema and Media Studies. (2022)