From Monoskop
(Redirected from Knizak)
Jump to navigation Jump to search 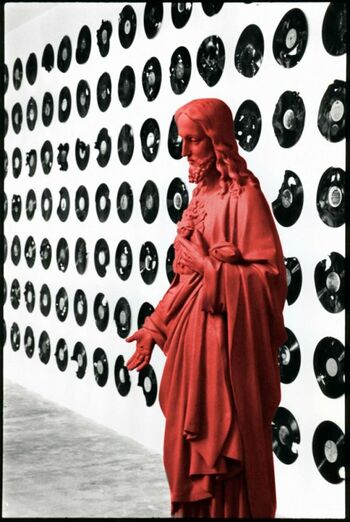 Milan Knížák (1940, Pilsen) is an artist and musician associated with Fluxus, organiser of the first Happenings in Czechoslovakia.

He commenced his career as an artist in 1957. In the early 1960s he began creating what he called Ceremonies and Demonstrations, Happening-like events that were often performed in the streets. Knížák founded a social organisation in Prague between 1963 and 1971 called Aktuální umění [Actual Art] ("Aktual" from 1966 on), with Jan Mach, Vít Mach, Sonia Švecová, Jan Trtílek and Robert Wittmann, which also had a branch in West Bohemia. Aktual staged numerous participatory actions, e.g. A Walk Around Nový Svět (A Demonstration for All the Senses) and the Demonstration of One (both 1964). The group also explored music, samizdat publishing, mail art and other "necessary activities" not always framed as art. Aktual sought a complete fusion of art and life, aiming to awake awareness of the people. Knížák later described Aktual as a group of self-elected people who desired to be different, and that this was the sole criterion for joining: its basic aspiration was to find a more vivid, all-encompassing experience of everyday life. His primary concerns were aesthetic rather than political: to change one’s life into art.

In 1965 Knížák began creating broken music by damaging gramophone records, scraping them, sticking tape on them, applying paint, burning, breaking them, gluing fragments of different records together, playing them and recording the results. New recordings created in this manner were issued as vinyl records as early as the 1970s, in several editions of Broken Music.

Through the critic Jindřich Chalupecký, Knížák was in contact with Allan Kaprow and Jean-Jacques Lebel, and in 1965 was nominated as "Director of Fluxus East" by George Brecht. Yet Knížák rejected both Fluxus and the Happenings: Fluxus for the contrived slightness of its events (which remained tied to the format of conventional stage performance) and the Happenings for their excessive theatricality. He felt that his own work was more 'natural', and closer to the reality of human life. As such, he preferred the term 'actions'. In October 1966, Knížák organised the Fluxus concert in Prague, in which he appeared together with Ben Vautier, Jeff Berner, Serge Oldenbourg, Dick Higgins and Alison Knowles. Maciunas already invited Knížák to the USA in 1965, but it was not until 1968 that he managed to obtain a visa. In New York, he participated in the Fluxus events taking place there; in New Brunswick he realised his Lying Ceremony (1967-68) and in New York the Difficult Ceremony (1966-69). Maciunas prepared the publication of Knížák's collected works as a Fluxus Edition, but it was never published.

In 1970 he returned to Prague. Always under police surveillance, he was also arrested on occasion. He received a fellowship from the DAAD Artists’ Programme and came to Berlin in 1979, after which he was frequently represented at exhibitions in Germany.

"In 1963–64 I started playing records either at slow speed or at high speed and, in so doing changing the quality of the music, creating my own other music.

In 1965 I began destroying records: scratching them, puncturing them, breaking them. Playing them – which ruined the needles and sometimes the whole record player – created a whole new type of music, one that was surprising, jarring, aggressive and funny. Songs could last for just a brief moment or, if the needle got stuck in a deep scratch, practically forever, the same passage playing over and over.

I developed this method even further. I started gluing records together, painting them, burning them, cutting and pasting parts of different records together and so on, in order to achieve the greatest variety of sounds. Later I began working in the same way with complete scores. I deleted some notes, keys and other symbols, or entire bars (in this way dictating the rhythm), redrew the notes and keys, changed the tempo, and the like. I also changed the sequence of the bars, played compositions in reverse, turned whole rows upside down, pasted together the most diverse parts of various scores, and so on.

I also used collections of popular songs or other pieces as scores for orchestral compositions. Each instrument or section or group plays one song. The resulting sound, where everyone keeps the tempo, intonation and length of the particular piece that they are playing, creates a new symphony.

And of course there were other similar approaches, combinations and offshoots. Since music created from playing destroyed records cannot be written down in notes or in other language (or only with great difficulty), the records themselves can also be considered as the notation." (from Milan Knížák, Novy Raj, Selection of works 1952-1995, Prague: Galerie Mánes, 1996; translated from Czech by Andre Swoboda) more (Czech) 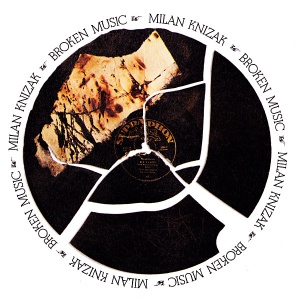 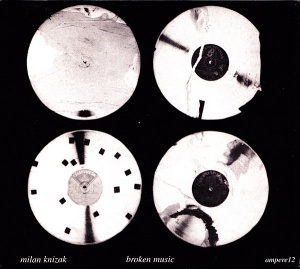 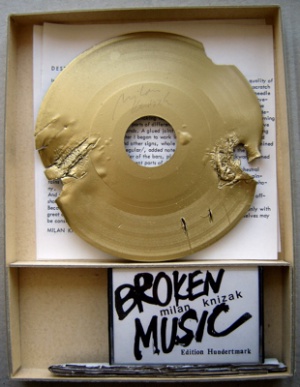 Untitled (Side A), 28'35" OGG
Untitled (Side B), 32'04" OGG
Label – Edition Hundertmark, 1983
Format – Carton box including a C-60 cassette of Knizak's Destroyed Music, signed and hand-numbered 1 to 40, a partially melted, hand-painted and signed 7" record, and 2 sheets of information text.
Cassette was also released separately in an edition of 60, signed but unnumbered copies.
via Continuo blog 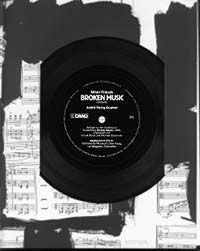