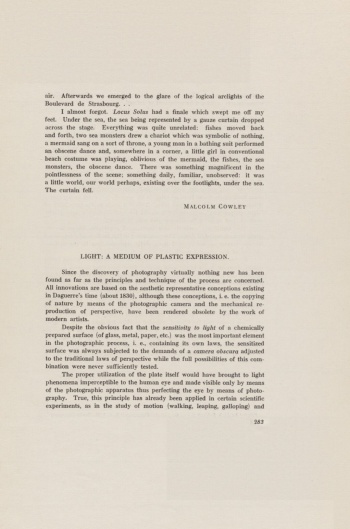 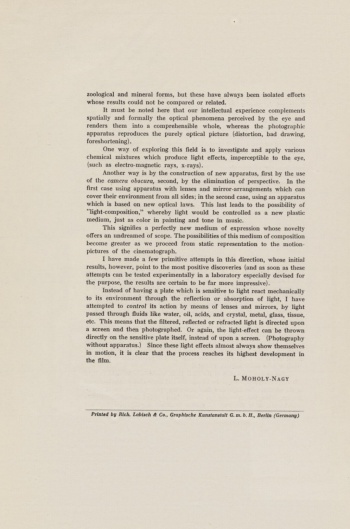 LIGHT: A MEDIUM OF PLASTIC EXPRESSION.[edit]

Since the discovery of photography virtually nothing new has been found as far as the principles and technique of the process are concerned. All innovations are based on the esthetic representative conceptions existing in Daguerre’s time (about 1830), although these conceptions, i.e., the copying of nature by means of the photographic camera and the mechanical reproduction of perspective, have been rendered obsolete by the work of modern artists.

Despite the obvious fact that the sensitivity to light of a chemically prepared surface (of glass, metal, paper, etc.) was the most important element in the photographic process, i.e., containing its own laws, the sensitized surface was always subjected to the demands of a camera obscura adjusted to the traditional laws of perspective while the full possibilities of this combination were never sufficiently tested.

The proper utilization of the plate itself would have brought to light phenomena imperceptible to the human eye and made visible only by means of photographic apparatus, thus perfecting the eye by means of photography. True, this principle has already been applied in certain scientific experiments, as in the study of motion (walking, leaping, galloping) and zoological and mineral forms, but these have always been isolated efforts whose results could not be compared or related.

It must be noted here that our intellectual experience complements spatially and formally the optical phenomena perceived by the eye and renders them into a comprehensible whole, whereas the photographic apparatus reproduces the purely optical picture (distortion, bad drawing, foreshortening).

One way of exploring this field is to investigate and apply various chemical mixtures which produce light effects imperceptible to the eye (such as electro-magnetic rays, x-rays).

Another way is by the construction of new apparatus, first by the use of the camera obscura; second by the elimination of perspective. In the first case using apparatus with lenses and mirror-arrangements which can cover their environment from all sides; in the second case, using an apparatus which is based on new optical laws. This last leads to the possibility of "light-composition," whereby light would be controlled as a new plastic medium, just as color in painting and tone in music.

This signifies a perfectly new medium of expression whose novelty offers an undreamed of scope. The possibilities of this medium of composition become greater as we proceed from static representation to the motion pictures of cinematograph.

I have made a few primitive attempts in this direction, whose initial results, however, point to the most positive discoveries (and as soon as these attempts can be tested experimentally in a laboratory especially devised for the purpose, the results are certain to be far more impressive).

Instead of having a plate which is sensitive to light react mechanically to its environment through the reflection or absorption of light, I have attempted to control its action by means of lenses and mirrors, by light passed through fluids like water, oil, acids, crystal, metal, glass, tissue, etc. This means that the filtered, reflected or refracted light is directed upon a screen and then photographed. Or again, the light effect can be thrown directly on the sensitive plate itself, instead of upon a screen. (Photography without apparatus.) Since these light effects almost always show themselves in motion, it is clear that the process reaches its highest development in the film.