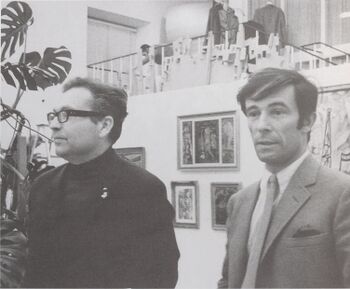 He spent his entire life in Třebíč, a small town in the Bohemian-Moravian Highlands. His work is typified by the way he freely uses a variety of media and techniques, primarily drawing, collage, text, and the written and spoken word. He was one of few Czech artists to become part of the international phonetic poetry scene. In 1962 he acquired a small Sonet Duo tape recorder and began experimenting by recording his own voice. Thanks to an editor at Czechoslovak Radio in Liberec, in 1969 he had the opportunity to record several of his poems in a professional studio, and those recordings found their way abroad. Although Novák lived in relative isolation and worked all his life as a secondary-school teacher, he was very well informed on contemporary developments in art. He corresponded with Raoul Hausmann, a protagonist of Dada and a promoter of sound poetry who had lived in Prague for a time before the war, and he had exhibitions with contemporaries such as Henri Chopin, Bob Cobbing, Bernard Heidsieck, Pierre Garnier, Ernst Jandl and Maurice Lemaître.

Phonetic poems were just one aspect of his versatility. He produced visual and concrete poetry, alongside collage, frottage and “alchymage”. Unlike phonetic poems, encoding in visual symbols implies that the instantiation of a poem cannot be set down in writing, and the opportunities offered by sound recording technology place his original recordings in a direct relationship with aural, chthonic and physical poetry.

Novák thereby restored to poetry its archetypal immediacy, allowing it to operate outside the written word. In the 1950s and 60s Novák’s phonetic and experimental poetry was also surely influenced by the political situation, and his work was a response to the voiding of the meaning of language, to the “entropy, degradation and manipulation of official newspeak policy”, in the words of the art critic and visual poet Jiří Valoch.