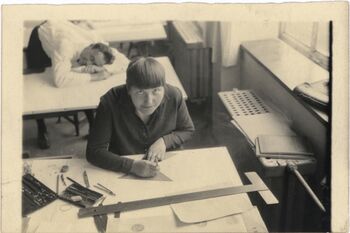 Life at Bauhaus Dessau: Students in the Department of Architecture. Lotte Beese and Helmut Schulze at the Tracing Table, c1928.

Lotte (Charlotte) Beese was born in Silesia, Germany (now Poland), in 1903. At the age of twenty, after training in stenography, she moved to Dresden for an office job at the Deutsche Werkstätten. While there, she was granted a spot in the institute’s weaving workshop, where she learned the fundamentals of the craft. In Dresden she became acquainted with several former students of the Bauhaus and was inspired to attend the school herself. Beese studied at the Bauhaus from 1926 through 1928, starting with preliminary courses taught by Josef Albers, Vasily Kandinsky, and Joost Schmidt. She then joined the weaving workshop, studying textile design under Gunta Stölzl for a year, before moving to Hannes Meyer’s architecture class, where she discovered her true professional calling. For the remainder of her professional life, Beese worked as an architect in Czechoslovakia, the Soviet Union, and the Netherlands. Though she took no formal classes in photography, Beese made a number of photographs during her years in Dessau and is known especially for her Bauhaus portraiture. (Source)