From Monoskop
(Redirected from Lumiere)
Jump to navigation Jump to search 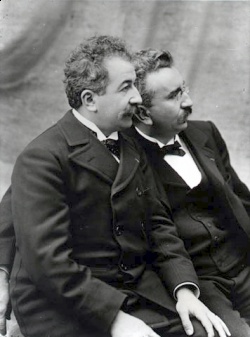 Auguste Marie Louis Nicolas Lumière (19 October 1862-10 April 1954) and Louis Jean Lumière (5 October 1864-6 June 1948) were two engineers and industrial French who played a key role in the history of cinema and photography. They are often referred to as the Lumière brothers.

They were born in Besançon and moved to Lyon in 1870, where both attended the technical school La Martiniere.

In 1903 they patented a colour photography process, the "Autochrome Lumière", launched on the market in 1907. Throughout much of the 20th century, the Lumière company was a major producer of photographic products in Europe, but the brand name, Lumière, disappeared from the marketplace following merger with Ilford.