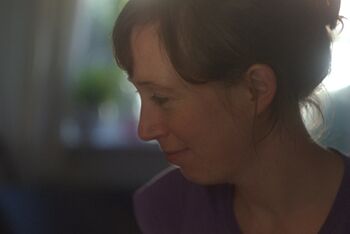 Marloes de Valk (NL) is a software artist and writer in the post-despair stage of coping with the threat of global warming and being spied on by the devices surrounding her. Surprised by the obsessive dedication with which we, even post-Snowden, share intimate details about ourselves to an often not too clearly defined group of others, astounded by the deafening noise we generate while socializing with the technology around us, she is looking to better understand why.

Marloes de Valk is a PhD researcher at the Centre for the Study of the Networked Image at London South Bank University, in collaboration with The Photographer's Gallery. She's a thesis supervisor at the master Experimental Publishing at Piet Zwart Institute in Rotterdam. She studied Sound and Image at the Royal Conservatory in the The Hague, specialising in abstract compositional computer games, HCI and crashing computers.

She has participated in exhibitions internationally, teaches workshops, gives lectures (among others at Transmediale and Chaos Communication Congress) and has published articles on Free/Libre/Open Source Software, free culture, art and technology. As part of the goto10 collective, from 2005 to 2010, she produced the chmod +x art festival, co-produced Make Art 2007 and 2009, and helped develop the puredyne GNU/Linux distribution. Her work consists of installations and software art. She is editor of the Digital Artists' Handbook (2009) and the publication FLOSS + Art (Mute Publishing, 2009). She is part of Plutonian Corp, La Société Anonyme and Iodyne Dynamics.

Her projects include Naked on Pluto (VIDA award), with Aymeric Mansoux and Dave Griffiths, a playful yet disturbing online game world, developed with Free/Libre Open Source Software, which parodies the insidiously invasive traits of much “social software”. The SKOR Codex (Japan Media Arts Festival award), with La Société Anonyme, a limited edition of eight hand bound books inspired by NASA’s Golden Record, aiming at preserving the memory of Dutch art institution SKOR for the distant future after it was closed down in 2012 due to massive funding cuts in the arts. What Remains, with Iodyne Dynamics, a darkly humorous, authentic Nintendo Entertainment System (NES) 8-bit game based on how public opinion was, and still is, shaped to prevent the creation of government regulations needed to protect us from man-made environmental disasters. Her latest project is Villains and Heroes, a game blending interactive fiction and investigative journalism in which you mingle with the supporters of Trump’s presidential campaign and bullshit your way through conversations with members of the think tanks and lobby groups that promote the denial of climate change. (2019), (2021)