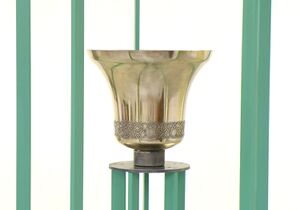 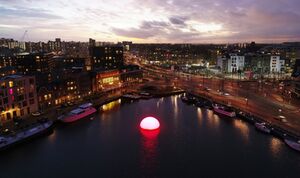 Mike Rijnierse (1974) is an artist, media researcher and educator working in the fields of light, sound and architecture. He is intrigued by perceptive experience, whether visual, acoustic, spatial, cross-sensory and synesthesia, creating sculptures, installations and site specific performances within the urban environment. Rijnierse has exhibited his works throughout Europe and in Korea, Taiwan, Morocco, United Arab Emirates and Brazil; from media art festivals, to galleries, museums and interventions in the public space. As a docent since 2009 at Design Art Technology faculty of ArtEZ, Arnhem, Rijnierse developed the course Design of Instruments, where students research and create instruments that transcend technological domains, exploring new and obsolete media. 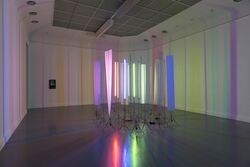 In the field of light Rijnierse has developed a meticulous study on the interaction between light, pigment and the retina. He gave concrete form to his discoveries in installations, projections and light designs with the series CYMRGB and the luminous sculptures such as Lumokinese and Cube. 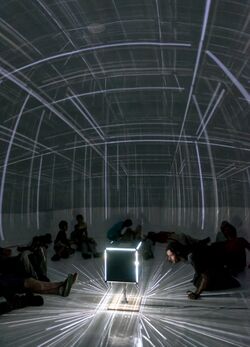 These works allude to optical instruments and devices such as the Laterna magica, kaleidoscopes and the zoetrope that are considered to be precursors of film, animation and digital media. Mike Rijnierse is not guided by nostalgia, his interest is in questioning the current production of image and examining visual experience, since devices and instruments of today no longer show their process and therefore work as ‘black boxes’. By showing the process of production of light, color, source and shadow, he illustrates how illusion and vision are intertwined. At the moment the project Light Space Modulator, a nine meter long rotating kaleidoscopic tunnel is in development. 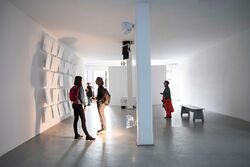 Rijnierse’s works Relief, Soundman, Piano / Forte, Adaptation #1 and most recent Sino, explore the acoustic domain. The phenomenon of echo and reflection is a recurring theme in the work of Mike Rijnierse. In fact Relief was inspired by the experience Rijnierse got during a large scale multi-channel loudspeaker installation he made in 2005. After sweeping the mainstreet of his hometown The Hague with live composed sounds for two times 12 hours over two days and observing their reflections in the urban context, Rijnierse noticed his acoustic focus was shifted to a longer range, which resulted in an echolocating experience. This experience was the motivation to develop Relief. 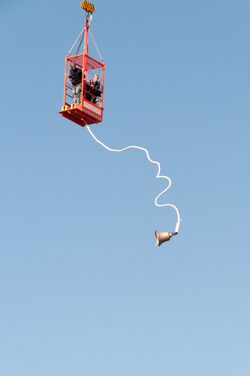 In fact, the phenomenon of echo and reflection is a recurring theme in the the work of Mike Rijnierse. As architect Juhani Pallasmaa wrote in ‘The Eyes of the Skin’: “Sight isolates, whereas sound incorporates; vision is directional, sound is omni-directional. The sense of sight implies exteriority, whereas sound creates an experience of interiority. I regard an object, but sound approaches me; the eye reaches, but the ear receives. Buildings do not react to our gaze, but they do return our sound back to our ears.” Through his work, Rijnierse raises awareness of our perceptive experience ‘using the city as a vast playground and field for sound experiments’ (Regina Debatty on Mike Rijnierse’s oeuvre in we-make-money-not-art)

A facet of Rijnierse’s work are his major interventions in public space. The artist developed the THX: INT’L (landing strip) for TodaysArt festival 2007. In TodaysArt 2008 edition, he developed Station to Station, in collaboration with Staalplaat Soundsystem and Erik Hobijn. In this project the entire railway station of The Hague Central – its building, travelers, trams and trains – were used for a large scale sound performance, with the timetable of the trains and trams serving as the basis of the composition. The train tracks were interpreted as sliders of a sound mixer, while the train station operated its normal schedule. During TodaysArt 2015 Mike Rijnierse presented two works: KLOK, a 100kg church bell that was thrown down every hour from the bungy jump tower of the Pier of Scheveningen. The 60 meters freefall of the bell added a Doppler effect to its tolling sound. With 5,4,3,2,1…Lift-Off, one of the opening performances of the festival, a simulated launch of a rocket, Mike Rijnierse deployed a massive amount of light, sound, smoke and pyrotechnics, executed in coordination with a pool of experts in order to recreate the realistic effect of a rocket launch. In essence, both works, KLOK and 5,4,3,2,1…Lift-Off, are related because of their verticality and the Doppler effect represented in a monumental fall and lift-off.

One of his latest works Sunset in Delft is a sculpture that reenacts the everyday phenomenon of the sun sinking into the horizon, and it does so, inside of a city. This massive glowing body of light has been placed on the water, precisely at the crossing of three canals in the idyllic town of Delft – the place where scientist Antoni van Leeuwenhoek and painter Johannes Vermeer possibly met, while pioneering experiments with Optics in the 17th century. The 360º panoramic view of this sun sinking on water subverts the usual perspective of the celestial star moving over the horizon.

Sunset in Delft lingered for three evenings, inviting for a durational experience. The public was instigated to see, walk around it, relish, and perhaps feel its warmth–therefore, to be in the present. As philosopher Byung-Chul Han writes: “What we experience today as acceleration is only one of the symptoms of temporal dispersal. Today’s temporal crisis is caused by a dyschronicity which leads to various temporal disturbances and irritations. (…)The feeling that life is accelerating is really the experience of a time that is whizzing without a direction. (…) it is the atomization of time which is responsible for dyschronicity. It is also the reason for the feeling that time passes much more quickly than it used to. Due to the temporal dispersal, no experience of duration is possible.”

Sunset in Delft is a collaboration between Ludmila Rodrigues and Mike Rijnierse. Mike and Ludmila have been collaborating since 2011, sharing a fascination for the ways human perception is constructed. Their works activate the public to navigate with their senses and to re-learn how to see, hear and feel.