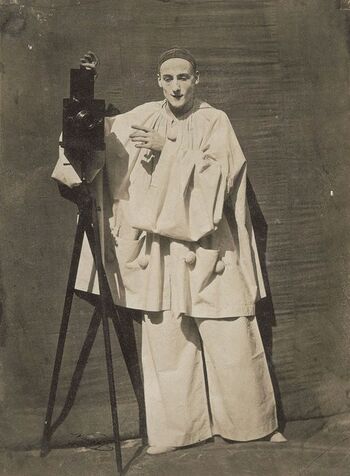 Gaspard-Félix Tournachon (known as Nadar) was a French photographer, caricaturist, journalist, novelist, and balloonist. He is famous for his photographic portraits of many artist, musicians, writers of 19th century. His works are held in numerous national collections around the world.

Born on 6 April 1820 in Paris, Nadar was the first child of printer/publisher Victor Tournachon and Thérèse Maillet. Originally educated in and around Paris, Nadar began but never completed the study of medicine in Lyons, where his father had relocated the family. In 1838 Nadar returned to Paris on his own and adopted “Nadar” (sometimes “Nadard”) as his pen name. In Paris in the 1840s, Nadar allied himself with a band of vagabond artists that Henri Mürger immortalized in Scènes de la vie Bohème [Scenes from the Life of Bohemia]; among them was Charles Baudelaire. Nadar’s first career was as a writer, but by 1846 he had embarked on a second career as a caricaturist, culminating in his 1854 tour de force, Panthéon Nadar (a revised version appeared in 1858), a set of two enormous lithographs comprising caricatures of noted Parisians. In 1854 Nadar also married Ernestine-Constance Lefèvre and assisted his brother Adrien by financing photography lessons for him with Gustave Le Gray and setting up a photographic studio, first for Adrien and then for himself. Though he continued to do caricatures throughout the 1850s, by the 1860s Nadar was an established portrait photographer in Paris, becoming a member of the Société française de photographie in 1856, exhibiting in its Salon in 1859, and pioneering a number of photographic techniques and locations, such as the first aerial photography and artificial lighting in 1858, equestrian photography in 1861, and photographing the catacombs and sewers of Paris in 1861–62 and 1864–65, respectively. In addition to these careers Nadar was also an aeronaut and financed a hot-air balloon called le Géant [Giant]. Nadar retired from photography in 1873, leaving his studio to his son Paul (1856–1939) to run. During his retirement Nadar continued to write and publish memoirs; he briefly re- emerged as a photographer in 1897 in Marseilles. Nadar died in Paris on 20 March 1910, fourteen months after the death of his wife [1].