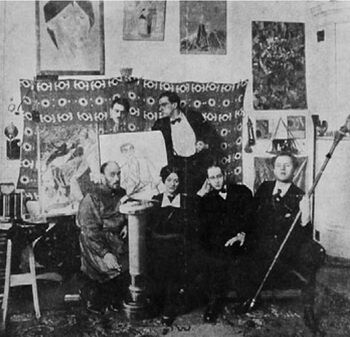 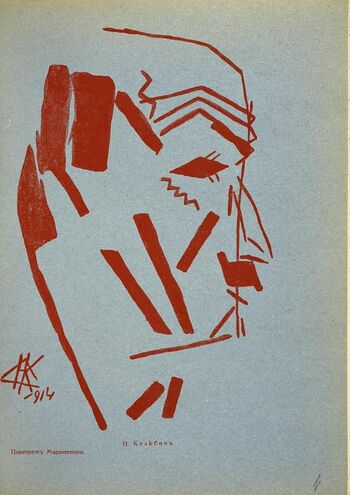 Kulbin graduated as a physician from the Military Academy of Medicine in St. Petersburg (1887-1892), and was awarded degree of Doctor of Medicine from the Clinic of Professor F.I. Pasternatsky for dissertation on alcoholism in 1895. From 1893 he was a member of the Society for the Protection of Peoples' Health and teacher at the St. Petersburg Military-Medical Attendants' School, publishing several scientific articles between 1896-1907. He worked as a surgeon at the Russian Army Headquarters between 1903 and 1917[2], and made a General and Full State Councillor, 1907.[3]

From 1888 Kulbin had specialised in the study of micro-scopic drawing, and from 1894 in microphotography.[4]

Between 1908 and 1910, Kulbin was in the centre of the avant-garde scene in St. Petersburg, maintaining that all objects in the world were alive and that life itself was based on the universal principles of harmony and dissonance. He took up art in 1908 at the age of forty, organising the Exhibition of Modern Trends in Art [Sovremennye techeniya v iskusstve] in May, which was the first ever show of avant-garde art in St. Petersburg.[5]

In 1907 he founded Triangle: The Art and Psychology Group (until 1910) that exhibited as the ‘Impressionists’, holding four exhibitions between 1908 and 1910 in St. Petersburg and Vilna (Vilnius) and giving many young artists their first opportunity to exhibit. The group included several, such as Yelena Guro, Vasily Kamensky, Aleksei Kruchenykh, Iosif Shkolnik and Eduard Spandikov, who went on to lead the local avant-garde movement and associate with the breakaway society Union of Youth, as well as the painter Boris Grigoryev, the graphic artist Vladimir Kozlinsky and the theatre director Nikolay Yevreinov, with whom Kulbin had a particularly close working relationship.[2][6][7]

Kulbin worked as a stage designer for Vsevolod Meyerhold’s Terioki summer theatre (1912), the Queen of Spades Theatre (December 1913-January 1914), helped Boris Pronin establish the Stray Dog cabaret, founded the groups ARS alliance (1911) and the Spectator (1912-13) and held a one-man exhibition of his work. He organised and participated in many avant-garde exhibitions in St. Petersburg, Moscow, Vilnius, Baku, Ekaterinodar, lectured on art theory and published numerous articles on the subject. He also illustrated several Futurist and theatre books.[3][8][9]

He was running a salon, a kind of informal association (in Russia this kind of establishment was called kruzhok, which was a very popular form of informal association, most typical for artists, poets and musicians all around the country) that included most Russian avant-garde artists, composers, poets, scholars and so forth, which permitted him to spread his ideas among the artistic community. He collaborated with the painters Kazimir Malevich, Olga Rozanova, the Burliuk brothers and Mikhail Matyushin, and helped establish them in St Petersburg [4]. It was Kulbin who arranged Filippo Tommaso Marinetti's visit to Russia in 1914.[10]

While Wassily Kandinsky was living abroad, he relied on friends back home to keep him apprised of cultural developments in Russia. When Arnold Schoenberg set off for St. Petersburg in 1912, Kandinsky arranged for his friend, Kulbin to meet him at the train station. “Kulbin knows everything, that is, he knows all the artists of importance,” Kandinsky wrote in a letter to Schoenberg. [5]

During this time Kulbin declared the liberation of sound from its captivity by tradition. His theoretical treatise Free music. Musical applications of the new theory of artistic creativity was based on his lectures conducted in 1908 and was printed in St. Petersburg in 1909. In 1912 it was published in Munich in the collection Der Blaue Reiter Almanac edited by Franz Marc and Wassily Kandinsky. Its significance for Russia was comparable with that of the Sketch of a New Aesthetic of Music published by Ferruccio Busoni in Europe in 1907.[11] He asserted:

"New possibilities are hidden in the sources of art itself, in nature. We are small organs of the living Earth, the cells of its body. Let’s listen to its symphonies, which make up part of the common concert of the Universe. It is a music of nature, natural Free music... Everybody knows that the sounds of the sea and wind are musical, that thunder develops a wonderful symphony, and of the music of birds."[12]

Anticipating the upcoming musical trends he advocated, amazingly for the time, quarter and eighth-tone music:

"The music of nature is free in its choice of notes — light, thunder, the whistling of wind, the rippling of water, the singing of birds. The nightingale sings not only the notes of contemporary music, but the notes of all the music it likes. Free music follows the same laws of nature as does music and the whole art of nature. Like the nightingale, the artist of free music is not restricted by tones and halftones. He also uses quarter tones and eighth tones and music with a free choice of tones."[13]

Kulbin developed his art theory on the basis of his physiological and neurological studies. For him, the physical action of the universal movement of colour or sound served as outer stimuli that caused psychical effects in the spectator’s brain. Kulbin declared harmony and dissonance to be basic principles of art.[14]

"A series of still unknown phenomena is revealed:
The close connection of tones and the processes of close connection.
These connections of adjunct tones of a scale, of quarter tones or even lesser intervals, may still be called close dissonances, but they possess special characteristics that customary dissonances do not.
These close connections of tones evoke unusual sensations in man.
The vibration of closely connected tones is extremely exciting.
In such processes the irregular beat and the interference of tones (which is similar to that of light) are of great significance.
The vibration of close connections, their unfolding, their manifold play, make the representation of light, colours, and everything living much more effective than customary music does."[15]

Although he died on 6 March 1917 just after the February revolution, his influence on the young generation of revolutionary artists and scholars was significant. Among his direct or indirect followers were Arseny Avraamov (expanding on microtonal music in his articles in 1914-16), Leonid Sabaneev, Arthur Lourié and many others.[16] 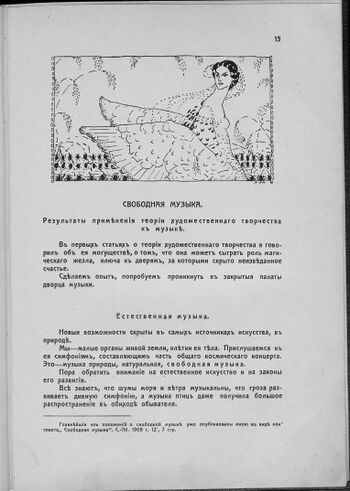 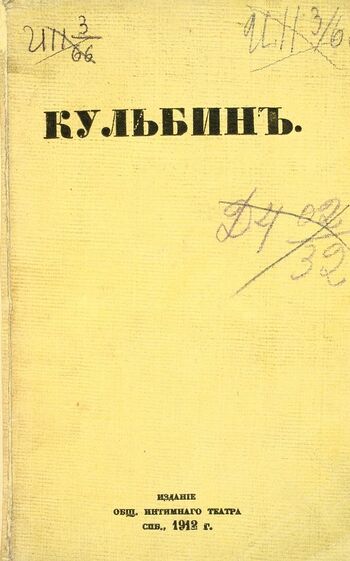