Orange Alternative (Pomarańczowa Alternatywa) was an underground protest movement started in Wroclaw, Poland, in 1983, and led by Waldemar Fydrych (sometimes misspelled as Frydrych), then commonly known as Major (Commander of the Festung Breslau). Its main purpose was to offer a wider group of citizens an alternative way of opposition against the authoritarian communist regime by means of a peaceful protest that used absurd and nonsensical elements.

By doing this, Orange Alternative participants could not be arrested by the police for opposition to the regime without the authorities becoming a laughing stock. Orange Alternative has been viewed as part of the broader Solidarity movement.

Initially it painted ridiculous graffiti of dwarves on paint spots covering up anti-government slogans on city walls. Afterwards, beginning with 1985 through 1990, it organized a series of more than sixty happenings in several Polish cities, including Wrocław, Warsaw, Łódź, Lublin and Tomaszów Mazowiecki. It suspended activity in 1989, but reactivated in 2001 and has been active on a small scale since then.

The movement carried on avant-garde ideas, with roots going back to Dada.

Some statements ascribed to Waldemar Fydrych:

In Poland there are only three places when you can feel free: In churches, but only for the meditations, in prisons, but not everyone can go to prison, and on the streets: they are the freest places.

The Western World will find out much more about the situation in Poland from hearing that I was put to jail for giving tampons to a woman, than from reading the books and articles written by other people from the opposition.

Can you treat a police officer seriously, when he is asking you the question: "Why did you participate in an illegal meeting of dwarfs?"

Orange Alternative movement may also have inspired and influenced the Pora and the so called Orange Revolution movement in Ukraine, which was in turn supported by Poland. Major Fydrych and a group of students participated in the Orange Revolution through happenings in Poland and Ukraine. 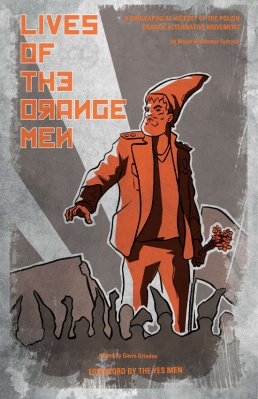