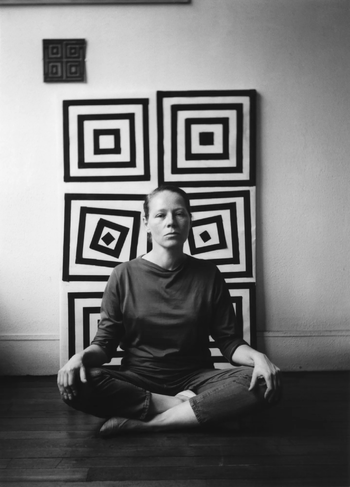 Vera Molnár (1924, Budapest) is a Hungarian visual artist and a pioneer of algorithmic art.

Fascinated by the tradition of European Constructivism, she contributed to its development through the introduction of a unique minimalist plasticist grammar based on the rules of computer programming. After completing her studies at the School of Fine Arts in Budapest (1942-1947), she moved to Paris. Along with other artists working in Geometric Abstraction who’d emigrated to Paris (such as Julio Le Parc), Molnár established the GRAV (Groupe de Recherche d'Art Visuel) collective which utilized artistic means for the study of optics. Later, she was also a member of the Art et Informatique grouping.

Started painting at the age of twelve, her first subject matter, nymphs and trees, inspired by an uncle. Soon progressed to more geometrical themes, and in 1968 started working with computers. Her work during this period focused on the breakup of repeating units, often expressed as a series of increasingly fractured images. In order to do away with what she calls "mental-cultural ready-mades," she employs different programmatic games and mathematical principles in order to produce series of work guided by a unifying quest for the invisible. Even in her earliest works based on the “imagined-machine,” Molnar challenged the artist’s position as the sole creator of art. While other kinetists questioned the role of the artist by incorporating audience participation into the creative process, Molnar shared her creative responsibilities with machines. Initially, the machines consisted of sets of algorithms generated in her imagination, before being replaced by actual computer software.

Vera Molnar holds that the computer can serve four purposes. The first concerns its technical promise---it widens the area of the possible with its infinite array of forms and colors, and particularly with the development of virtual space. Secondly, the computer can satisfy the desire for artistic innovations and thus lighten the burden of traditional cultural forms. It can make the accidental or random subversive in order to create an aesthetic shock and to rupture the systematic and the symmetrical. For this purpose a virtual data bank can be assembled. Thirdly, the computer can encourage the mind to work in new ways. Molnar believes that artists often pass far too quickly from the idea to the realization of the work. The computer can create images that can be stored for longer, not only in the data bank but also in the artist's imagination. Finally, Molnar thinks that the computer can help the artist by measuring the physiological reactions of the audience, their eye movements for example, thus bringing the creative process into closer accordance with its products and their effects. (based on source and source)