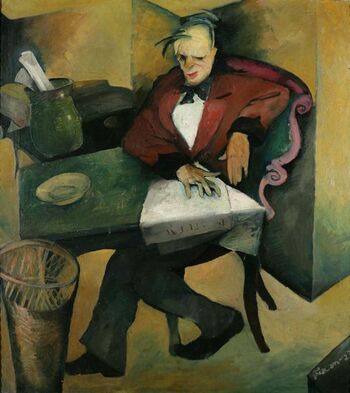 Vilko Gecan (16 June 1894, Kuželj near Brod na Kupi – 25 June 1973, Zagreb) was a Croatian painter, graphic artist, illustrator and caricaturist, influential in the Zagreb modern art scene of the 1920s and 30s. He is best known for his expressionist paintings and drawings, and for his contributions to the avant-garde magazine Zenit.

Gecan began painting during high school (1910). In 1913 he went to Zagreb and attended the private painting school of the famous painter Tomislav Krizman. That same year he enrolled in the Academy of Fine Arts in Munich as well as Heymann's private painting school. During 1919-1924 Gecan lived between Zagreb, Prague and Berlin, during 1924-32 in the U.S. (New York, Chicago), with the exception of 1928 when he lived in Paris.

In the Zagreb Spring Salon of the 1920s, he participated with Milivoj Uzelac, Marijan Trepše and Vladimir Varlaj, who together were known as the Group of Four or The Prague Four. Trained in Prague, works of these young painters brought new expressionist ideas that went on to dominate the 1920s Croatian art scene.

From 1932 until his death he lived in Zagreb.