From Monoskop
(Redirected from Wodiczko)
Jump to navigation Jump to search 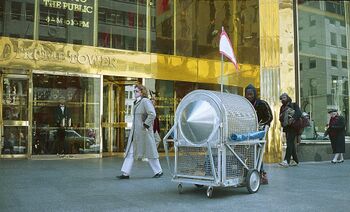 Krzysztof Wodiczko (1943) is an artist renowned for his large-scale slide and video projections on architectural facades and monuments. He is Professor in Residence of Art, Design and the Public Domain at the Graduate School of Design at Harvard University.

He has realized more than 90 of public projections and installations in Australia, Austria, Belgium, Canada, England, Turkey, Germany, Holland, Northern Ireland, Israel, Italy, Japan, Mexico, Poland, Spain, Switzerland, and the United States. Since the late 1980s, his projections have involved the active participation of marginalized and estranged city residents. Simultaneously, and also internationally (England, Finland, France, Poland, Holland, Japan, Northern Ireland, Spain, Sweden and the US) he has been designing and implementing a series of nomadic instruments and vehicles with homeless, immigrant, and war veteran operators for their survival and communication.

Wodiczko’s work has been exhibited in Documenta (twice), Paris Biennale, Sydney Biennale, Lyon Biennale, The Venice Art Biennale (Canadian and Polish Pavilions), in Magiciens de la Terre exhibition, Paris, Venice Biennale of Architecture, The Whitney Biennial, Yokohama Triennale, International Center for Photography Triennale, New York, The Montreal Biennale (2014), The Liverpool Biennale (2016) and other international art festivals and international exhibitions. In 2009, he represented Poland in the Venice Biennale. In 2017, Wodiczko has held a retrospective exhibition at the Museum of Modern and Contemporary Art in Seoul.

He is a recipient of the Hiroshima Art Prize in 1998 “for his contribution as an international artist to world peace”. He is also recipient of Skowhegan Medal for Sculpture, the Georgy Kepes Award, MIT, the Katarzyna Kobro Prize, and "Gloria Artis" Golden Medal from Polish Ministry of Culture.

Krzysztof Wodiczko is a former Director of the Center for Advanced Visual Studies and the head of Interrogative Design Group at MIT and since 2010 is a Professor and a coordinator of Art, Design and the Public Domain, a postgraduate (MDes) concentration at the Graduate School of Design at Harvard University.

He was teaching at Warsaw School of Social Psychology (SWPS), and since 2013 is a visiting Professor at the Media Arts Department of Academy of Fine Arts, Warsaw.

Wodiczko’s books include Critical Vehicles: Writings, Projects, Interviews published by MIT Press (1999), a large monograph of his works titled Krzysztof Wodiczko (2012), September 11: City of Refuge (2009), The Abolition of War (2013) by Black Dog Publishing, London, followed by expanded Polish edition under the title Obalenie Wojen by MOCAK (2014), Guests by Charta (2009), and a comprehensive collection of his writings ‎titled Transformative Avant-Garde and Other Writings (2016) by Black Dog Publishing, London.

Krzysztof Wodiczko’s work has been presented as a part of PBS television series Art 21, Art in the Twenty-First Century: Season III.