Workshop of the Film Form 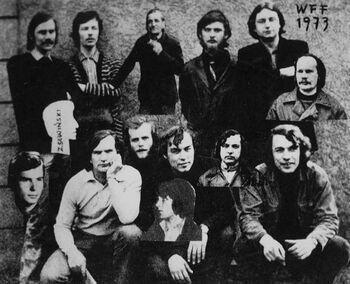 The Workshop of the Film Form (also The Film Form Studio; Warsztat Formy Filmowej, WFF) was a group of avant-garde artists who were working at the Leon Schiller National Higher School of Film, Television and Theatre in Lodz, Poland, between 1970 and 1977. As pioneers of video art in Poland and structural cinema in Central and Eastern Europe, the artists refused classical narrative and traditional film media, working instead somewhere between cinematography and contemporary art.

The group was created in 1970 as a section of a science club at the Łódź film school. The Workshop was made up of students and graduates of the Leon Schiller National Higher School of Film, Television and Theatre who were disappointed by its curriculum and teaching methods.

The Workshop was shaped by the experience of its members who belonged to the Toruń group Zero-61, and an amateur film club Loop [Pętla]. They took inspiration from avant-garde movements – constructivism of the 1920s and 1930s, they often referred to the works of Stefan Themerson (and brought back his character at the same time). For this reason, it seemed natural for them to collaborate with the Łódź Art Museum, at the time managed by Ryszard Stanisławski.

Within the group the members were able to create their very own educational and research curriculum independent of the school's requirements – whilst at the same time benefiting from its financial help and technical infrastructure. This is the reason why, as art historian Łukasz Ronduda points out, "the majority of their radical films were shot in the 'Hollywood' format of 35mm". By criticising not only the school system, but also the entire institution of cinematography, the Workshop took a place in between cinema and contemporary art. According to Ronduda: "on one hand, the FFS artists offered exceptionally innovative productions in both of these domains, but on the other hand – they potentially faced 'double exclusion'".

The critique of cinema as a mindless creation of imaginary worlds went hand in hand with a need for an analysis of the film medium, which often took the form of attempting to reach its foundations and unmasking the ease with which it can be manipulated. On the other hand, a film camera, and later a portable video camera, was becoming a valuable tool in their hands, enabling the group to create an alternative interpretation of reality, different from the one everyone had become accustomed to and which they have adopted 'naturally'.

They accused cinema of conforming too much to literature (content over form) as well as to politics and didactism. They wanted cinema to be more self-reflexive. They criticised the superior role of directors. Hence the film form as an opaque medium was their primary interest. They were able to simultaneously reveal manipulation that commercial cinema viewers were subjected to. As art historian Piotr Piotrowski wrote: "By making 'minimalist' films – analytical and very economical – the Workshop's artists provided an alternative to the bloated, ideological, commercial and literary-narrative film productions of the official film studios".

In their work, they focused on both cinema (film festivals interventions) on one hand, while on the other the concentrated on visual arts (they have collaborated with the Łódź Art Museum from the early days of their career).

Józef Robakowski wrote in 1971: "My work is currently focused on ridding films of elements typical of literary enunciation". He was partially referring to his exposing activities and partially to investigating the medium and its core characteristics. In the piece entitled Commentary (Komentarz, 1972) Kwiek entirely omits the actual plot, bringing the film down to a short text read out in front of an audience. His 1, 2, 3.. a camera exercise [1, 2, 3.. ćwiczenie operatorskie] featured Kwiek describing the process of producing a film after he placed a camera in the hands of a randomly selected student: "I begin to wonder: what's going to be shown on the screen? What is the film going to be about? I think that, overall, it's going to be about nothing. I accept the lack of meaning, or perhaps the lack of importance of that film. Just as generally neither these three minutes of my life or the things I have done influenced by the camera will matter."

Robakowski's film entitled Test (1971) was a film tape full of holes – the artist perforated it to such an extent that during screening the projector lamp light would shine through. At times, he would stand in front of an audience holding up a mirror, reflecting the projector’s light into the crowd. Kwiek worked in a similar fashion at the time (Mirror [Lustro], 1971), using a mirror to direct a ray of light emitted by a film projector. In the Workshop's films the plot was reduced, often disappearing completely or amounting to no more than letters of the alphabet or digits on a leader tape appearing on the screen at a steady speed (Robakowski's An exercise [Ćwiczenie], 1972, and Kwiek's 30-minute Numbers [Numerki], respectively). According to Ronduda, this need to "tear through hypostases of meaning to a purely physical dimension of 'writing' in the context of an overly interpreted communist reality of Poland gained a unique meaning – it became a response to it".

Their work was not always as radical. In one long, static shot, Waśko filmed a window and the view from it. The sound came from outside the frame where the artist "played" on various objects. Ronduda wrote: "a situation was created that allowed the viewer to become conscious of the very act of looking and watch himself look". The Workshop's artists often established their own codes which they depicted using the film language ("Pictures Language" by Bruszewski, 1973 - the first art piece by the Polish artist was created using a videotape). Ryszard Waśko edited his films based on either a mathematical process (Rejestracja, 1972) or an accident (Wall [Ściana], 1972).

An analysis of the medium was conducted by separating the visual and audio layers of films, or distorting the balance between the two, revealing the possibilities of manipulation. In Attempt II (Próba II, 1972) Robakowski combined an intensive shade of red with classical organ music. Wojciech Bruszewski was also highly skilled in this type of manipulation. For instance, by editing together a number of different scenes, he created a scream of such a length, that it was impossible for a human being to copy it (YYAA, 1973). In Time Structures (1976) he manipulated the sound of a stopwatch and in the piece entitled An audiovisual experience (Doświadczenie audiowizualne, 1975), the sound of matchboxes being hit became the sound of a slamming window.

The artists' work, particularly that of Robakowski and Kwiek, headed towards a union between the medium and the body and its experience, thus overrating the importance of the author. Robakowski wrote about "the machine's creativity" and in works he referred to as "biological-mechanical records", he would move the camera away from his eye or shake two cameras held in each hand ("Działania na dwie ręce", 1976), he registered his own body's slow exhaustion as he walked up the stairs leading to a tall tower (I'm coming [Idę], 1973) and filmed a line visible on the ground (Along the line [Po linii], 1977). Kwiek attempted to combine technology and corporality by, for instance, synchronising his own breath with the controller used to adjust brightness of the image. The movement of his chest would cause changes in the brightness (Video and breathing [Video i oddech], 1978).

This novel take on subjectivity was linked to rejecting traditionally understood categories of authorship both in terms of visual arts (the oeuvre's author) and cinematography (film director). A camera used as a source of images in the group's productions nearly always plays an objective, purely mechanical role (e.g. Wacław Antczak's journey to a store on the Main Street [Podwóż Wacława Antczaka do kiosku przy ulicy Głównej] by Waśko, 1973). Robakowski's assembly films are probably the best expression of this attitude towards authorship - the artist would initiate and coordinate a process while the films were made by others. Films such as 22x (1971) featuring work by students and Record (Zapis, 1972) portraying participants of the "Art Cleaning" event in Warsaw and A living gallery (Żywa galleria, 1972) were all made using this method. Kwiek broke up with authorship subjectivity in order to create situations which improved communication between people. He would create relationships between his audience and himself through, for instance, allowing his viewers to give him orders as a camera man.

Lastly, what needs to be acknowledged in works created by the Workshop of the Film Form, is the nihilist Dadaist element – one which is very rarely present in Polish art. It becomes noticeable in their interest in the amateur movement (e.g. Edward Kowalski's 'Pensioner's Theatre'), during their legendary interventions in film festivals, when during a public discussion with the director of More at stake than life [Stawka większa niż życie] Robakowski impersonated him being late for his own event in front of an audience unaware of his act (1972). On a different occasion the group made the audience boo the groups own films screened at a festival in Łagowo (1971).

Three years after the group was dissolved in 1977, its former members founded Ruch Odnowy Uczelni [School Restoration Movement] focusing on reforming the Leon Schiller National Higher School of Film, Television and Theatre. Among their demands was a wish to remove the party secretary from the School senate meetings and preventing him from influencing its curriculum. The Movement organised an exhibition with a Solidarity department in Łódź, A construction under process, with Waśko as its curator. The Movement's work and the reforms it introduced were brought to a halt by the introduction of Martial Law in December 1981. (Source)