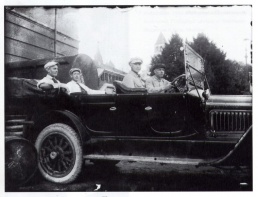 Karl Ioganson, Voldemars Andersons, Karlis Veidemanis and Gustav Klutsis pose in Lenin's Model T Ford at the Kremlin, Summer 1918. All four artists were members of a detachment of Latvian machine gunners appointed to guard the Kremlin after Lenin's transfer of the Russian capital to Moscow in March 1918. 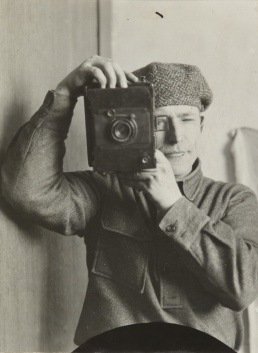 A Latvian subject of the Russian empire, Gustav Klutsis came to Russia proper during the 1917 Revolution as part of a volunteer machine-gunner unit that helped to topple the czar and safeguard the new Soviet leaders, including Vladimir Lenin. Klutsis had studied painting at home and continued in art schools during and after his military service, ending up at the radically progressive Higher State Artistic and Technical Workshops (VKhUTEMAS)—the cradle of Constructivism. By the early 1920s, Klutsis had worked his way through the rigorous exploration of elemental shapes and basic materials called for by that movement and began to put the Constructivist ethos of honesty and utility to use in agitational propaganda. His designs for mobile poster stands and broadcasting towers (mostly unrealized) to be used for the fifth anniversary of the Revolution were succeeded by years of press illustrations in the rapidly developing idiom of photomontage. Klutsis adopted photography as a means of reinvesting advanced art with what he called “ideologically rich subject matter” that a mass audience would find instantly identifiable and compelling.

Klutsis brought photomontage to its peak of expression in posters from 1930 and after that blended workers’ bodies (in some cases his own) and their machines with the heads of leaders of the Soviet state to forge a collective juggernaut for modernization. These posters, printed in the tens of thousands, helped transform the Soviet visual landscape in the early Stalinist era. Nevertheless, Klutsis was killed along with scores of other Latvians on Stalin’s orders during purges later in the decade. (source)