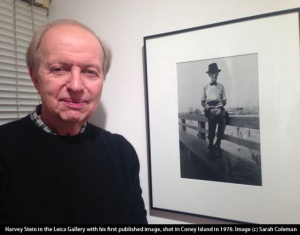 Harvey Stein is a professional photographer, teacher, lecturer, curator, and author based in New York City.

Harvey Stein currently teaches at the International Center of Photography and in the graduate digital program at the School of Visual Arts. He is a frequent lecturer on photography both in the United States and abroad. He has also been a member of the faculty at The New School University, Drew University, the Rochester Institute of Technology, and at the University of Bridgeport. A recipient of a Creative Arts Public Service (CAPS) fellowship and numerous artist in residency grants, Stein has had five books of his photographs published. Stein's photographs have been published in such periodicals as The New Yorker, Time, Life, Esquire, American Heritage, Smithsonian, The New York Times, Reader's Digest, Glamour, Forbes, Psychology Today, Harpers, Connoisseur, Art News, American Artist, New York, People, Der Spiegel, Die Zeit, and all the major photo magazines.

Stein's photographs have been widely exhibited in the United States and Europe -- 72 one-person exhibits and over 140 group shows to date. He is the Director of Photography of Umbrella Arts Gallery and has curated 15 exhibits since 2007. His photographs are in more than fifty public collections and numerous private collections.