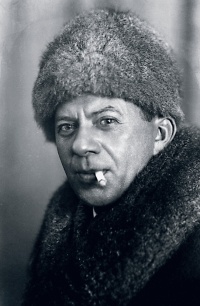 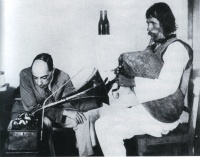 in left Constantin Brăiloiu recording a man singing at a cimpoi, the Romanian bagpipe (photo by Iosif Berman reproduced in National Geographic Magazine, 1934)

Iosif Berman (1892–1941) was a Romanian photographer and early photojournalist.

During the mid-1920s, Berman collaborated with the Romanian sociologist Dimitrie Gusti, who studied Romanian villages and traditions, and with Filip Brunea-Fox (1898–1977) on his reportage articles.

After the World War II, the communist government tried to use the photos for propaganda, but they were hardly propaganda material. According to a researcher at Museum of the Romanian Peasant, he presented a realist view of the rural life, with its poor, its gypsies, its village idiot.

Berman in front of the bear, image taken fromThe man with thousand eyes