Ivor is an internationally recognized, award-winning technoshaman and cyberalchemist. His main obsessions are identity, the existence of space-time, of organic life and consciousness. Works in fields of neurocinema, mixed reality, game-art, bio-art, artificial life and virtual entities. Working since 1994 and exhibiting internationally since 1999 at over a hundred new media art venues around the world. Received a number of prestigious international awards and distinctions. Ivor is the founder of _humane after people_ - an art-science group addressing questions of the future of the human condition and aiming for a machine-unreadable humanity. Their projects strive to be detached from socially conditioned perception and our simian legacy as much as possible, and focus on what really matters: the human being as autonomous conscience in the unvoid. Ivor is from nowhere and lives on teh Internets. 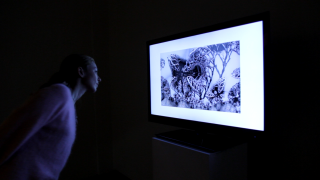 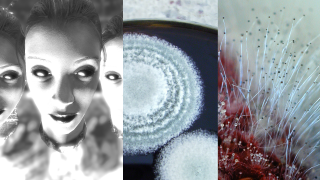 "molding the signifier" is an interdisciplinary project on the intersections of art, cybernetics, ecology, linguistics and biology. It draws from a wide array of particular fields, including artificial life, ecology, virtual humans, computer vision, neurolinguistics, theories of perception and consciousness, computational approximations of mental processes, cell research, and the study of mental illness. It offers multiple layers of irony and a discursive, confrontational and emotionally charged approach as to what constitutes (human) consciousness and how we perceive what is human from a perspective that is very sensitive to the problem of “uncanny valley” – language.

"molding” draws from state-of-the-art biochemical theories that approach the body as a functional conglomerate of myriads of previously autonomous biological agents, that we traditionally know and call cells. The body is understood as complex ecosystem into itself, like a microcosmic galactical empire with vast holdings and expanses, with billions of different inhabitants, each interdependent but also fighting for power and influence, with consciousness rising as a consequent emergent phenomenon of this microcosmos.

The installation deploys an external biological agent to infiltrate and disrupt the body-ecosystem of a virtual human. Data from a contaminated biologic culture (a mold species growing in a petri dish) are continuously monitored via a digital microscope and measured with a set of bioelectric sensors. This real-time input is gradually interspersed into the neuronal logic that govern facial recognition (of exhibition visitors), and the virtual human visualization/simulation combined with emotion expression and speech synthesis. These processes are over time slowly disrupted by the growing contamination, resulting in increasing levels of perceived digital madness. The virtual human’s facial features start to twitch and contort with increasing intensity, and glossolalia (speaking in tongues) gradually phases out comprehensible speech.